Lee DeWyze won American Idol in what Ryan Seacrest called one of the closest contests yet in American Idol history. DeWyze winning American Idol was also the final headline of Simon Cowell’s career as an Idol judge. 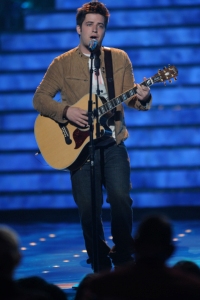 As the news rocked the American Idol world, DeWyze in fact was the winner despite the consensus from the judges that the contest was Crystal Bowersox’s to lose.

She did in fact lose the competition because no one thought to ask the fans! They spoke loud and clear and their American Idol is DeWyze!

DeWyze also capitalized on the “teen girl” vote that is still a solid fan base for American Idol. Although Cowell is leaving and the show has seen a deep drop in ratings, that passionate fan base of teenage girls has not left the Fox hit show. That is no consolation to Bowersox.

DeWyze, a former paint salesman from Illinois, is now another success story in the American Idol legend. But, will he be one of the last? There still is no word on Idol’s future as they head into next season.

DeWyze will release his first single this week and begin his journey as reigning American Idol. Last year’s winner Kris Allen performed on the finale and as all Idol fans know, the champ always returns to the Nokia Theatre stage where the dream got going for this and past American Idol champions such as Carrie Underwood and David Cook.