Sarah Jessica Parker never goes out of style. Parker is currently seen in Sex and the City 2 and we take a look back at the person behind the persona. 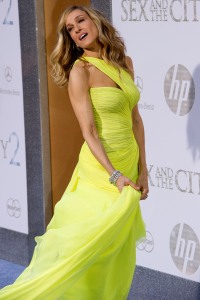 Sarah Jessica Parker in the spotlight

Sarah Jessica Parker may be one of America’s top fashionistas today, but she’s come a long way to earn that rep! As one of eight children, she grew up sharing clothes and was limited to only one to two pairs of shoes a year (gasp!). Even when she landed her breakout gig on Square Pegs, there was no opportunity to get dolled up, as she played brainy Patty Greene, a desperately awkward teen.

Parker was born in Nelsonville, Ohio to Barbara, a nursery school operator and teacher, and Stephen, an entrepreneur-journalist. Mom moved the kids to Cincinnati after remarrying Paul Forste, a truck driver and account executive. With eight kids in the blended family, money was often tight, but Barbara kept the clan active with scholarship-funded ballet, music and theater class.

After Parker and her brother landed parts in the Broadway play The Innocents, the family moved to New York City. Parker went on to do a stint as Broadway’s Annie and landed her first TV gig, an unlisted part in The Little Match Girl, at only eight years old.

She made her first real mark on TV, however, in her teens, when she landed one of the lead roles on Square Pegs in 1982. The campy high school comedy about two dorky girls only lasted a season, but Parker followed that up with a role as Chris Penn’s girlfriend in Footloose and then a lead in Girls Just Want to Have Fun.

While making a name for herself, the left-handed actress was also on the hunt for love. After she fell for Robert Downey Jr on the set of their 1984 film Firstborn, the pair moved in together. Four years later, Downey’s infamous battle with drugs proved to be too much for their relationship. There were also short flings with costar Nicolas Cage and John Kennedy Jr, but then Parker met her husband, Matthew Broderick in 1991. The couple married on May 19, 1997 and went on to have three children.

Then Carrie Bradshaw came into her life, along with gal pals Samantha, Charlotte and Miranda (Kim Cattrall, Kristin Davis and Cynthia Nixon).

Sex and the City creator Darren Star wanted Parker for the role from the start and although she wasn’t sure about signing onto a series, she made the life changing decision to take the lead in 1998. Parker’s gig as a sassy, fashion-obsessed writer who took on Manhattan with her pals earned her four Golden Globes, three Screen Actors Guild Awards, and two Emmys, while also turning her into a household name and fashion icon. SATC was also where the actress made the transition to executive producer.

Fans had to wait four years for the first SATC film to hit theaters, but that anticipation paved the way to a blockbuster opening weekend. Carrie’s Big love was back in 2008 and the movie opened in first place, with $55.7 million. Her salary on the film is said to have been $15,000,000!

SATC2 takes the girls on a vacation to the Middle East and days before the May 27 premiere, 350 movie theaters were already reporting they’d sold out of tickets.

The former Annie has also made returns to the stage. Among her theater credits are roles in How To Succeed in Business Without Really Trying with hubby Broderick, David Lindsay-Abaire’s sold out run of Wonder of the World and a six-month stint in the Tony-nominated Broadway production of Once Upon a Mattress.