Sandra Bullock is scheduled to make her first public appearance since the Jesse James cheating scandal broke in the days following her Best Actress Oscar win for The Blind Side. 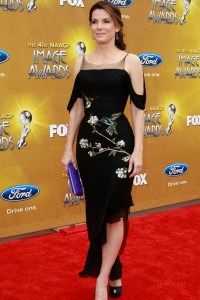 MTV made the announcement May 26 that Bullock would be the recipient of the network’s MTV Generation Award — the first awarded to a female!

Bullock, in turn, announced that she would be attending the June 6 ceremony in Los Angeles to accept her award. SheKnows will be on the MTV Movie Awards red carpet and looks forward to catching up with Bullock after our chats for The Proposal and The Blind Side. Much has certainly happened to her since those first visits with SheKnows.

The MTV Generation Award honors a celebrity that has made a significant impact to pop culture over the course of MTV’s life. Bullock has more than done that and coming off her most successful year to date in 2009, the award is apt, timely and deserved.

Completely absent from the public eye other than paparazzi photos of her and baby Louis, this is the first time that Bullock will make herself available to the public since the James sex scandal broke.

The timing of MTV’s announcement is suspect, but in a good way.

James took to the airwaves May 25 on Nightline and Good Morning America to profess his sincere apologies for hurting Bullock and blamed his indiscretions on childhood abuse.

Throughout the entire scandal, Bullock has been the picture of class as James’ venturing into sex rehab was met with scoffs and calls of “you have to be kidding.”

Bullock, while staying away from the public eye in her New Orleans home, hasn’t exactly been dormant since attending the Oscars. News broke recently that Bullock had adopted a New Orleans orphan back in January while she and James were still a couple.

SheKnows would like to congratulate Bullock on her MTV honor and take the opportunity to give respect to MTV for making the award announcement while James’ interview appearance is creating buzz. Now that word is out that Bullock will emerge from seclusion to accept MTV’s honor on June 6, perhaps that buzz will move away from James’ less-than-heartfelt apology and return the spotlight to the true superstar, Sandra Bullock!