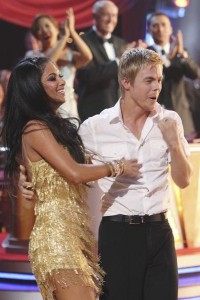 Gosselin pulled off a feat — she danced fairly well. Dancing with the Stars trotted out the losers to huff and puff across the dance floor one last time before announcing the winner.

The Dancing with the Stars winner would be Pussycat Dolls singer Nicole Scherzinger and partner Derek Hough.

Scherzinger may just go down as Dancing with the Stars’ best dancer ever. This doll knows how to dance.

But Gosselin did more than simply dance fairly well — a shocker. She emerged among real stars to be this season’s biggest celebrity and biggest audience draw. (More than 18 million people tuned in for last night’s finale, rebounding after ratings took a nose dive when Kate was eliminated).

Tom Bergeron introduced Gosselin (and partner Tony Dovolani) as “our most most talked about” celebrity. Indeed. Last night’s episode dedicated a big chunk of time to Kate trying to redeem herself — her dancing, that is, to Gloria Gaynor’s I Will Survive.

She ended her dance hauled way up high on a mechanical lift with a camera inches from her face. It was funny and light-hearted. Bergeron quipped, “Welcome to Over-the-Top Productions.”

Oh, and, of course, the three finalists performed. Erin Andrews and Maksim Chmerkovskiy got bumped off early on.

Then, Scherzinger and Hough danced the jive — lively and flawless. Scherzinger said she was shooting to be “crazy impressive.” Done.

Up next was Olympic gold-medal winner Evan Lysacek and partner Anna Trebunskaya — they of the good dancing-lack of chemistry critiques. Their final performance? Good, not great.

In other words, Scherzinger — shrieking and jumping into Derek’s arms — accepted the Dancing with the Stars trophy. Scherzinger was the well-deserved winner. As judge Carrie Ann Inaba said, “You are incredible. You’ve set this place on fire.”

Kate Gosselin on Dancing with the Stars finale