Jesse James revealed his tough guy persona is a cover for feelings of extreme vulnerability brought on by years of abuse at the hands of his father.

In fact, he says, his fixation on motorcycles, fast cars and loose women is an act. “All that stuff is a huge smokescreen,” he says, for what he really is, “a terrorized kid.” 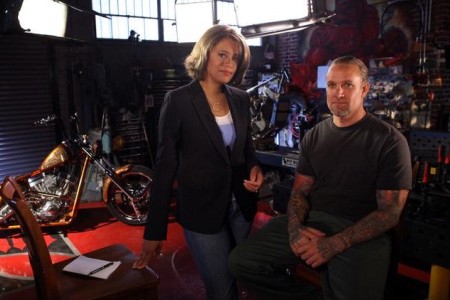 The cheating husband of Sandra Bullock was so emotional during the Nightline interview he had to excuse himself to collect his thoughts. The moment came when describing a fight he had with his father that resulted in a broken arm.

“He beat my a** pretty good a bunch of times,” Jesse James alleged. “…I just remember, like, clinched teeth, strained-neck look on his face.”

“I remember my dad laughed at me when I hit the ground and called me a dummy,” Jesse said. “It’s really tough for me to think about now because… Sunny’s the age that I was when my dad broke my arm.”

Jesse James blames his bad childhood for his complete and total betrayal of America’s sweetheart. “It was me wanting to self-sabotage my life,” he said. “I basically never felt good enough for anyone.”

In fact, Jesse told Nightline his recent stint in rehab was not for sex addiction like many thought, but to finally deal with his childhood.

“I don’t think I have a sex addiction where I’m running around trying to have sex with everyone and I can’t stop,” said the Monster Garage star. “There’s a lot of people who are abused that go on to abuse, or go on to do drugs… or go on to, you know, cut themselves… They’ll do it to self-sabotage their life… because of their abuse, they’ve never felt good enough.

“Why would I totally destroy my wife’s life and humiliate her when I knew it was bad, you know?” Jesse James continued. “I may seem like a monster in peoples’ eyes, but I’m not that kind of person where I will willfully, you know, I’m gonna get her, I’ll show her. That’s not what it’s about. It’s about trying to push someone away that I thought was going to leave anyway.”

In that, at least, he has succeeded. Bullock announced her plans to divorce Jesse and adopt baby Louis as a single mother.

Although Nightline aired a photo of a young Jesse James with two black eyes, his father denied the abuse in an email when contacted for comment.