American Idol held the first part of its two-evening finale with performances by its finalists, Crystal Bowersox and Lee Dewyze. Bowersox and Dewyze made one last pitch to America hoping for their vote to become the latest American Idol. 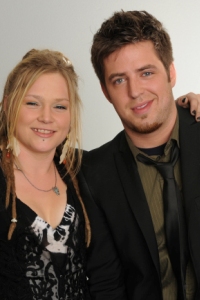 Bowersox and Dewyze put on quite a show, but there can only be one winner. American Idol host Ryan Seacrest will make that announcement just shy of 10 pm on May 26 after an evening of performances set to delight.

In past years, the results show finale has thrilled with pairing the American Idol top 10 with music superstars. Last year, for example, Adam Lambert jammed with Kiss! Look for those types of pairings tonight as the two finalists await their fate.

Meanwhile, we wondered: How did Bowersox and Dewyze do on last night’s American Idol finale?

Remember the Seinfeld episode when George had this break-up plan with the whole “It’s not you, it’s me” speech? Enter last night’s episode of American Idol.

In a stunning move by judges, Dewyze got the very same sentiment from the judges when they quipped, “You’ve got to believe it when we say that it’s not you, it’s us.” Simon Cowell went on to say that Dewyze is a “super nice guy” and has shown a ton of growth. As for the big but? The judges articulated that something was missing last night from Dewyze’s performance, and that something was passion.

It was a surprising move by the American Idol judges who have been talking up Dewyze in the media. Dewyze began by singing his favorite song from a previous American Idol episode, The Boxer. Although he belted out the hit by Simon and Garfunkel and performed much better than last time, like a one-two punch, Bowersox came back swinging, singing to Me and Bobby McGee. It was clear that her energy surpassed Dewyze’s significantly and the audience responded.

The second song for each contestant in the American Idol finale, chosen by the show’s executive producer Simon Fuller, was REM’s Everybody Hurts for Dewyze and Alannah Myles’ Black Velvet for Bowersox. As they switched up the third performance — Dewyze sang U2’s Beautiful Day and Bowersox performed to Patty Griffin’s Up to the Mountain, one thing became clear: The finale did not disappoint!

What can viewers expect in tonight’s two-hour American Idol finale beginning at 8 pm? A lot of flashbacks and farewells to the exiting Cowell, much fanfare and rocking performances, and yes — the crowning of the new American Idol.

Who do you think will win? Let us know below!