Jesse James talked with Nightline in a largely unsuccessful attempt to repair his reputation. 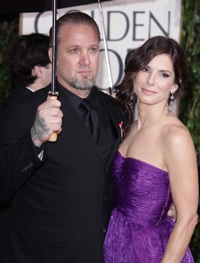 In the interview, Jesse James discusses his split with Sandra Bullock, the baby they were supposed to adopt together, the infamous Nazi photo and why he is generally such a d-bag.

What was James’ excuse for the Nazi pics? It was all a big joke.

James said, “I could tell by the look on my face it was a joke that was funny then — probably for a minute — but then looking at it in the context of now and in my life, it’s not funny. There’s not a racist bone in my body.”

That affair with a white supremacist doesn’t count as racism in James’ world. In fact, he is so not a racist that he okayed the co-adoption of a black baby with Bullock, his soon-to-be-ex.

“My only prerequisite for adopting a baby: I want the baby that needs us the most. To see her in the role as mother is, like, one of the most amazing things I’ve ever seen. She is like a fish to water, as soon as she put that baby into her hands, it was automatic and amazing. I found a new trust for her, like I knew she wasn’t going to leave and our relationship blossomed.”

And that right there is where the d-bag comes out. “I found a new trust for her, like I knew she wasn’t going to leave, and our relationship blossomed.”

But at least he knows he was being a d-bag, even if he’s not aware he still is one. “I lied to everyone about everything, even to myself,” James said.

Super-classy Bullock has kept mum and held her head high, seen walking baby Louis — whom she is adopting as a single mom — around his home city of New Orleans where she recently bought a house.

Stay tuned for more coverage on Jesse James’ Nightline interview after it airs!