The Bachelorette season premiere rocked May 24 with its latest star, Ali Fedotowsky, being wooed by 25 eager men.

Fedotowsky first shot to fame on last season’s The Bachelor, when she was torn between her job with Facebook and bachelor, Jake Pavelka. The fan fave chose work and left the show, leaving Pavelka to eventually pick the fan villain, Vienna Girardi. 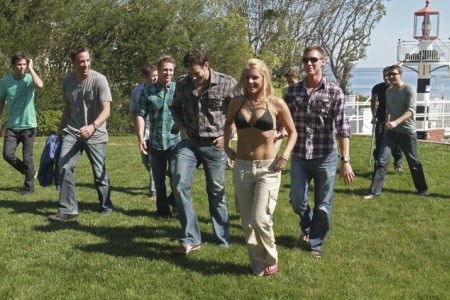 Fans were thrilled when Fedotowsky was named the new Bachelorette, giving her a new chance at love! (Who needs Jake or work for that matter?) And now the two enemies have apparently made up. According to Chris Harrison, host of The Bachelor and The Bachelorette, Fedotowsky and Girardi shared a hug at Monday night’s Dancing with the Stars. So sweet, but was it sincere?

Now Ali has her share of men to choose from, although she had to send eight men packing already. She had a wide variety to pick from with plenty of cheesy pickup lines and attention-grabbing high jinks.

One Bachelorette contestant climbed out of the limo roof, while another did a back flip. Another gentleman brought a scrapbook, another a ring, and two brought roses to give to Ali. After the typical cocktail party where the preening, scheming men made their grab for Ali, the rose ceremony ensued and Fedotowsky narrowed her choices to 17 men.

Our pick so far for Ali? The handsome Roberto, who earned the first impression rose on The Bachelorette premiere. With his Latin dance moves he could salsa his way into Ali’s heart for good.