Details are emerging on Lindsay Lohan and her ankle bracelet and what it means to the former starlet. With Lohan, life has been designer handbags and gowns, but now all that glitters in Hollywood isn’t gold. Lohan’s new accessory –- her alcohol monitoring bracelet on her ankle — is likely not on her must-have list of summer fashion. 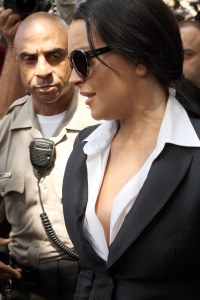 On May 24, a California judge ordered that Lohan wear a SCRAM alcohol-monitoring ankle bracelet. Although the 23-year-old Lohan appeared in court wearing a black business suit with her hair pulled back in a ponytail, she had no choice but to wear the bracelet immediately after the ruling had ended.

Inside the courthouse, Lohan was put into the anklet and was told by the judge that she’ll meet with a probation officer this Thursday. Lohan’s lawyer said that she was “prepared to demonstrate by action that she’s going to comply with all court orders.”

Here’s why: If Lohan doesn’t comply and is found in violation when she appears in court again on July 6, the punishment could be up to six months in jail.

Despite her attorney’s statement to comply with the law, Lohan seemed to be less than pleased to wear the anklet, indicating via her attorney it would interfere with photo shoots and an upcoming movie shoot in Texas. Her attorney argued that Lindsay could perhaps be subject to random alcohol testing in lieu of the ankle bracelet. The judge denied the attorney’s request.

In court, the judge asked her if she understood the conditions to which Lindsay muttered, “Yes, your honor.” Although she’s subject to random drug testing, must attend alcohol education classes once each week, and wear the bracelet (it can detect traces of alcohol through the person’s perspiration and has to be worn 24/7), this is not good news for Lohan.

This is the second time she’s worn the alcohol detection device. Three years ago after her very first DUI arrest and stay in rehab Lohan voluntarily wore one. So for Lohan fans out there, let’s hope her non-stop partying, run-ins with the law, and even fender benders in the news will no longer overshadow her career.