With Bono recovering from emergency spinal surgery, 16 U2 shows in the US will be postponed and a European gig has been canceled. Over one million U2 fans are being urged to keep hold of their tickets for a “rain date” type rescheduling in the future. 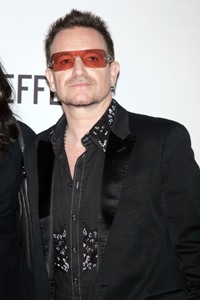 “Our biggest and I believe best tour has been interrupted and we’re all devastated,” says U2’s manager Paul McGuinness. “For a performer who lives to be on stage, this is more than a blow. He feels robbed of the chance to do what he does best and feels like he has badly let down the band and their audience. Which is of course nonsense.”

Bono, was taken down in Germany by a severe compression of the sciatic nerve. An MRI scan revealed a serious tear in the ligament and a herniated disc, which required emergency surgery.

“Bono was referred to me…late last week with a sudden onset disease,” explained his surgeon, Professor Tonn at Munich’s LMU University Hospital. “He was already in severe pain with partial paralysis in the lower leg. The ligament surrounding the disc had an 8mm tear and during surgery we discovered fragments of the disc had traveled into the spinal canal. This surgery was the only course of treatment for full recovery and to avoid further paralysis.

“Bono is now much better, with complete recovery of his motor deficit. The prognosis is excellent but to obtain a sustainable result, he must now enter a period of rehabilitation.”

This rehab and Bono’s recuperation will take at least 8 weeks.

The band hopes to be back on the road in time for their August 6 show in Turin, Italy, but in the meantime, 16 shows have been postponed, starting with Salt Lake City on June 3 and going through New Jersey’s Meadowlands Stadium on July 19.

With over a million fans holding tickets to these shows, the band is working with Live Nation to set new dates in 2011. Fans who planned on attending these shows should keep a hold of their tickets, as they await updates!

U2 will also be missing the Glastonbury Festival, where they were supposed to be the headliners on Friday, June 27.

“I’m heartbroken,” Bono told Glastonbury organizer Michael Eavis in a phone call. “We really wanted to be there to do something really special — we even wrote a song especially for the Festival.”