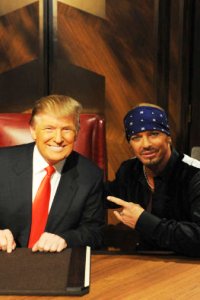 The rocker, who has battled diabetes all his life, fought through a brain stem bleed, a hole in his heart and a warning stroke — all in a matter of weeks — to beat actress Holly Robinson Peete and win $250,000 for the American Diabetes Foundation.

Even Trump seemed surprised Michaels made it to the boardroom for the final episode of Celebrity Apprentice, asking if Michaels was putting his health in danger by flying to New York from his Scottsdale, Arizona home to appear on the episode.

“Lately it seems like me just standing up is risking my life,” Michaels jokingly said.

Michaels was rushed to the hospital with a brain hemorrhage just a month before the finale. After a fast and truly miraculous recovery coming after ten days in critical condition, he suffered a setback after being hit with a small stroke. Doctors then found a hole in his heart.

The singer appeared in good spirits on the show, but walked with a slight limp and had some slackness on one side of his face, an after-effect of the stroke. In an interview with Meredith Viera on Today, he said that while he is not yet 100-percent he is ready to get back to it.

“It’s great and awesome to be here. The doctor said it’s not very smart to be here, but I’m not a very smart guy in that capacity. I really knew I wanted to be [at the finale],” he told Viera. “This is the truth: I’m not back 100 percent yet, but I’m one of those guys that I have to have a goal, and I’m very driven, and I say this truthfully, I love life.”

“When I went in there to do the show, I was committed 100 percent,” he said. “Everybody wants to win for their cause and I went in there, I had no intention to hurt anybody. My intention was to do the best job I can do. When I had the hemorrhage I thought it was over. I got to tell you I was so happy to have been there. I set my goal.”

Will he still perform at his planned summer tour? “I say this much: I don’t know that I’m ready yet and I’m going to take it in baby steps,” he explained. “I’ve had so many amazing fans. I’m ready to get out of the hospital and on the road. I’m ready to rock.”