Lindsay Lohan was back in court today, May 24, and charged with violation of parole. Lohan’s new bail requirements include staying sober, wearing a SCRAM bracelet, submitting to random drug testing and attending the alcohol education classes that she was already supposed to be attending. 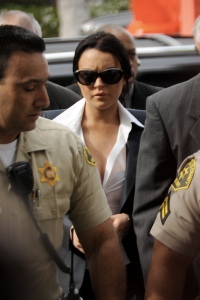 With a July court date scheduled for Lohan, however, this isn’t the end of it.

Judge Marsha Revel issued a warrant for Lohan’s arrest last week, along with $100,000 bail, after the actress missed a court date concerning possible parole violations. Lohan alleges she was stuck in Cannes, first due to the volcanic ash coming from Iceland and then because her passport was stolen.

Today’s televised appearance was scheduled to reset bail and then schedule a second date to determine whether she violated probation by missing alcohol education classes.

The new hearing is set for July 6 and until then Lohan must stick to her new bail requirements. In addition to random drug testing and those alcohol education classes, she must wear a SCRAM device, which detects traces of alcohol through the wearer’s perspiration and cannot be removed.

These new court orders mean Lohan can’t leave Los Angeles, as the SCRAM bracelet is monitored in the LA area and the random drug testing is also to be performed in LA.

Attorney Shawn Chapman Holley tried to convince the judge to allow Lohan to forgo the chunky and unflattering jewelry and fulfill random testing in Texas, claiming the new conditions amounted to undue financial burden. Apparently, the star has upcoming photo shoots and a Texas film set expecting her.

The judge wasn’t interested in hearing that. In fact, Revel threatened that if Lohan officially objected she was prepared to verbally list her reasons for believing the requirements are appropriate and that her explanation would be entered into the official record.

As Holley quietly explained what this meant to Lohan, the judge added that she had 30 minutes worth of reasons under her robe. (Not sure if that would be more harmful to Lohan’s case or with the cameras rolling — to her reputation — but ouch!)

After some back and forth with an unhappy Lohan, Holley accepted the new conditions. Looks like that non-stop party in Cannes was her last for awhile!

The judge also reiterated that whether or not Lohan attends extra alcohol education classes each week, she must attend the scheduled ones. The only allowable reason for missing a class would be for a surprise drug test.

Holley will also be making copies of paperwork that proves both Lohan’s attempt to return to the US for her hearing last week and her efforts to replace her stolen passport.

To clarify, all this is just about Lohan’s bail requirements. If found guilty on July 6 of violating parole, Lohan may have more to worry about than a Texas movie set — like say, 180 days to six months in prison!