Kendra Wilkinson is set to make oodles of cash from her sex tape, despite publicly decrying its release. 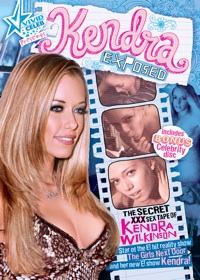 The former Girl Next Door reportedly cut a deal with Vivid Entertainment earning her up to 50 percent of all sales of Kendra Exposed, including downloads.

Wilkinson was just 18 years old when the tape was made with her ex-boyfriend, Justin Frye, an MMA fighter. Kendra and Justin reportedly broke up when Hugh Hefner moved her into the Playboy Mansion.

Wilkinson allegedly tried to cut a deal with Vivid herself back in 2008, but the deal fell through when Hef wouldn’t approve it. Frye, who has multiple tapes of Kendra getting down and dirty while the couple lived together in San Diego, brought them to Vivid himself and made a quick and dirty $100,000.

A deal for Wilkinson was negotiated separately, which should prove quite lucrative if history repeats itself — Paris Hilton, Pamela Anderson and Kim Kardashian all laughed their way to the bank after the release of their sex tapes.

We could even see a boxed set just in time for the holidays — not only did Wilkinson make multiple tapes with Justin, but Vivid also has another tape of Kendra in their hot little hands. This one shows the bunny in lots of compromising positions with another woman and multiple sex toys. Hope Wilkinson cuts the same deal for the hot girl-on-girl action, because knowing the proclivities of the American male, it will sell way faster than her with the dude.