Bret Michaels is back in the hospital after suffering a “warning” stroke. Testing reveals the Celebrity Apprentice finalist also has a hole in his heart. 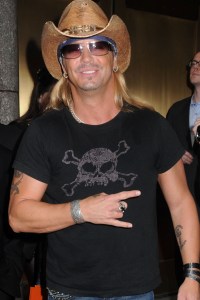 Michaels, 47, has been working toward recovery since that potentially fatal brain hemorrhage back in April and only yesterday, he was on Oprah sharing his experience. Less than a day later, however, the rocker’s health has taken another frightening turn.

“Bret Michaels was readmitted to the hospital this week after suffering numbness on the left side of his body, predominantly his face and hands which doctors described as a Transient Ischemic Attack (TIA) or warning stroke,” his website revealed.

At the hospital, Michaels was given a battery of tests, only to receive the shocking news that he also has a hole in his heart, known as a Patent Foramen Ovale.

“There is no doubt that the positive Patent Foramen Ovale (PFO) is devastating news to Bret and his family,” his neurosurgeon Dr Joseph Zabramski said. “The good news is that it is operable and treatable and we think we may have diagnosed the problem that caused the Transient Ischemic Attach (TIA) or warning stroke.”

It is not believed to be connected to the earlier brain hemorrhage, but the doctor, who spoke on Michaels’ health throughout his April ordeal, noted that Michaels once again saved himself by seeking immediate medical attention.

Michaels will be able to continue his treatment, which includes a daily injection of the blood thinner Lovenox and blood tests, on an outpatient basis.

The former Poison front man has won over many new fans with his run on Celebrity Apprentice. While his VH1 reality dating series Rock of Love leaned toward the trashy, he’s proven to be an amazing idea guy with an endearing spirit.

With the competition now down to him and Holly Robinson Peete, Michaels intends to make next week’s live conclusion show to compete for the win.

“Bret wants everyone to know he cannot thank you enough for all of the well wishes, prayers, and good vibes you have sent his way,” his rep Janna Elias shared. “Even though these last few months have been tough on him and his family, especially this most recent setback, he is in good spirits, in great medical hands and is positive and hopeful that everything is going to be OK.

“He is up, walking, talking, continuing his daily rehab and very happy to be alive but he has made it clear he is sick and tired of being in the hospital and is ready to rock again.”

Rock on, Michaels, rock on!