In Shrek Forever After , Mike Myers’ lovable ogre is living domesticated bliss. The only problem for Shrek is he misses the adventure of the days when he was one of the most feared beasts in the world. 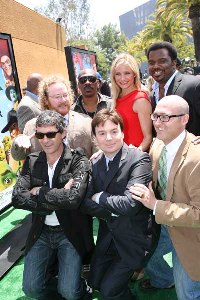 Shrek strikes a deal with Rumpelstiltskin to enjoy a 24-hour period where he can live life as he did before meeting his love, Fiona (Cameron Diaz). A single day free of the responsibilities of fatherhood sounds terrific to Shrek until he awakes and it is that day.

The world has completely changed and no one who knew him before even recognizes his face. In fact, he terrifies everyone!

The cast of Shrek Forever After sat down for a chat about the fourth film in the DreamWorks franchise and how even though the popular consensus is this is the final chapter — they would all leap at the opportunity to return to the world of Shrek.

Shrek Forever After arrives on DVD December 7 and its stars, Myers, Diaz, Eddie Murphy, Antonio Banderas, as well as new stars Jon Hamm (Mad Men) and Craig Robinson (The Office), chime in on how Shrek has affected them and their feelings on Shrek‘s place in pop culture history.

The cast of Shrek forever after speaks

Mike Myers: Jeffrey (Katzenberg, executive producer) said, “Would you like to be in an animated movie?” I said, “Yes.” He said, “It’s called Shrek.” I said, “That’s the worst title I’ve ever heard in my life!” And I didn’t know what it was going to be. Then in the process, the first time I saw it with an audience and the line “But you are beautiful to me” got a gasp from the crowd, who were so into the whole romance and the whole heart of it, I just was blown away that an animated movie could move people. It was something that people would be invested in emotionally and I think that’s been the most satisfying thing for me. 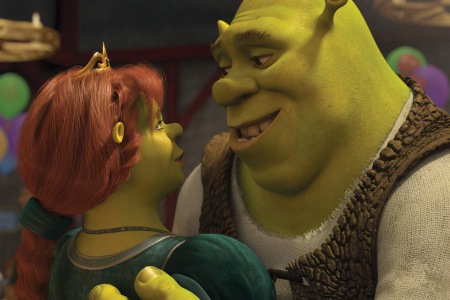 SheKnows: What has been the secret to the success of the Shrek franchise?

SheKnows: Cameron, was it a nice challenge for you to portray Fiona having to fall in love with Shrek all over again?

Cameron Diaz: You get to see true love happen all over again for the first time between Shrek and Fiona, because they get to find one another. It’s the moment that you’re talking about, your favorite moment from the first movie that you get to experience all over again — because we get to take the journey with them of finding that love again. You open up on the two of them sort of in the routine of life that they’ve taken for granted, or Shrek has for sure, and then you get to see him journey back through trying to regain and find his true love and that ultimately is just a beautiful, lovely story. And you get to fall in love with Shrek and Fiona all over again.

SheKnows: Walt, I can’t imagine anyone else doing the voice of Rumpelstiltskin. You nailed it. How long did it take to come up with that voice? 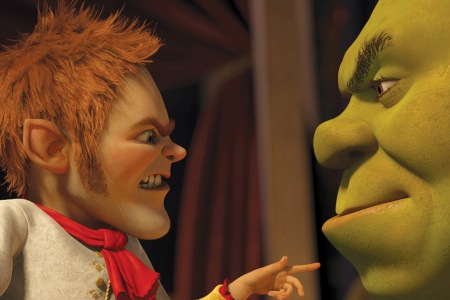 Walt Dohrn: I think he’s been inside me my whole life. We worked on the voice for a year, not knowing I would be cast. Then once I got cast we started really trying to push it as best we could.

SheKnows: Antonio, how has the Shrek experience affected you?
Antonio Banderas: A lot, actually, and it is unexpected because I came to this country without speaking the language. The fact that they called me just for the use of my voice was very surprising. I have fun every time that I have been on recording sessions and still do have a lot of fun. I remember when we opened in the Cannes Film Festival and you saw the whole entire movie theater interrupting the movie with applause 12 times, it was kind of stunning to me. I’ve had beautiful moments around the world. 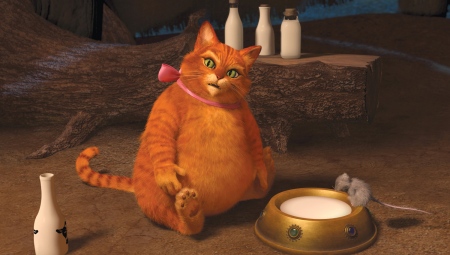 SheKnows: Now, as a new man in the Shrek scene, Jon, how did you get the role of Brogan?

Jon Hamm: I don’t know why the character I play on TV would necessarily lend itself to being the first choice to be an animated character. I don’t know. Honestly, I can’t believe I’m sitting up here. When it came my way and they were still trying to figure out what it was going to be — was it going to be a love interest or a rival or something, we weren’t really sure. I don’t care, I just want to be part of this. I’ve loved the last 3 versions of this and went and saw all of them in the theaters like I was a 13 year old. The pure fan of me was like, “I’ll go play somebody who talks backwards, on top of his head, I don’t even care.” And the fact that they were able to work with me and my personality and create this person who’s a cheerleader of sorts was fun to do.

SheKnows: And another new guy, Craig, did you enjoy playing Cookie?

Craig Robinson: Yes. Playing a female ogre named Cookie was fun. I think we all have both sides. I had my feminine side show up. I didn’t know I had an ogre side [laughs], so that kind of helped out. It was a good time.

Up next…we go inside the new Shrek world!