Lindsay Lohan is a wanted criminal! An arrest warrant has been issued for Lohan after she missed a scheduled court date in Los Angeles. 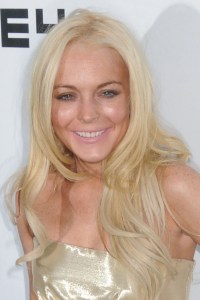 Life is one giant party for Lindsay Lohan, and she has a Louis Vuitton suitcase full of excuses for the repercussions of her decadent ways. This time, though, after being given every chance in the world to straighten up and fly right, it looks like Linds might actually be heading to the slammer.

Lohan had a court date to examine the status of the terms of her probation, particularly whether or not she had completed her required alcohol education classes. She had not, by the way — as of last week Lohan had only nine of the thirteen classes under her belt, and had not completed any of them in the manner the judge ordered, meaning at least one every seven days. She just kind of floated in and out when she felt like it.

She could have made it back to LA for her court date if she really wanted to, but all those pesky excuses — all totally made up, by the way — prevented her from doing so. Excuse number one: Volcanic ash disrupted flights. Problem is, Air France says absolutely no flights from anywhere in France are being affected by the Iceland volcano.

Excuse number two: Her passport was stolen. Problem is, despite the fact that Lohan’s lawyers told the judge this had been reported to authorities, cops in Cannes have no record of any such report.

Excuse number three: Lohan says she didn’t complete the classes because her instructor made her uncomfortable. She says the woman kept texting her saying she wanted to hang out. Problem is, Lohan never reported this to anyone before she got into hot water for not attending.

Superior Court Judge Marsha Revel, not a fan of flimsy excuses, immediately revoked Lohan’s probation and issued an arrest warrant. If she posts bail she will be required to wear an alcohol monitoring bracelet and submit to weekly random drug testing.

Right now, Lohan is still in France. Her lawyer says she is due to return to LA on Friday, and will probably be grabbed by US Customs as soon as she steps off the plane. Will she come back? Or will she pull a Roman Polanski and roam Europe for years until her misdeeds catch up with her decades later?

23 mins ago
by Caroline Greelish