Megan Fox, one of Hollywood’s hottest babes has been kicked to the curb — or has she? Fox will not be back for the third installment of Transformers, but the exit is turning into a he said-she said, with the he being director Michael Bay. 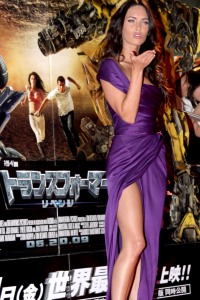 The initial assumption by many was that Fox, the hot bodied, full-lipped blue eyed beauty was ousted due to the drama between her and series director Michael Bay. After Transformers: Revenge of the Fallen came out, the two fell into a public sparring match in which Bay called her immature after she compared him to Hitler.

“He’s like Napoleon and he wants to create this insane, infamous mad-man reputation,” Fox told Wonderland Magazine last fall. “He wants to be like Hitler on his sets, and he is. So he’s a nightmare to work for but when you get him away from set, and he’s not in director mode, I kind of really enjoy his personality because he’s so awkward, so hopelessly awkward.”

Can’t imagine why he’d want her off his set! She also said his movies weren’t giving her a chance to stretch and shine as an actress, but Bay seemed to take it all in stride — sort of.

“She says some very ridiculous things because she’s 23 years old and she still has a lot of growing to do,” Bay told The Wall Street Journal. “You roll your eyes when you see statements like that and think: Okay Megan, you can do whatever you want. I got it.”

Bay went on to note his special effects-laden movies have turned Nic Cage, Ben Affleck, Will Smith and Martin Lawrence into stars, while Transformers put both Fox and Shia LaBeouf on the map.

As cantankerous as all that sounds, Fox told MTV there was no drama.

“That’s just me and Mike. That’s how we talk,” she maintained. “Obviously, what he said is not untrue, about me saying ridiculous things all the time and being 23. That’s all accurate.”

As if to support this, initial movie talk from Bay actually had the bombshell back in the Transformers fold.

Now, however, she’s officially out and one story is that he’s gotten his revenge by cutting her from the film, while others insist the exit is storyline dictated.

Meanwhile, after the stories about her exit hit the news circuit yesterday, another angle emerged. Someone from Fox’s camp released a statement denying she’d been ousted.

“It was her decision not to return,” the release says. “She wishes the franchise the best.”

Hmm…Well, regardless of who bailed on whom, Transformers 3 should do fine without the starlet, especially with a cast that includes Patrick Dempsey, Frances McDormand, John Malkovich and Ken Jeong!

And news arose that The Hills Heidi Montag has let Bay know she wants to replace Fox. Seriously? Montag has no acting skills and the last thing Bay would want on his Transformers set is Montag and her husband, Spencer Pratt.

It remains to be seen how this will affect Fox’s career, however. Jennifer’s Body didn’t get the opening she was hoping for last year, so she’s got something to prove when her next action flick, Jonah Hex with Josh Brolin, John Malkovich and Will Arnett, hits theaters on June 18.