Katrina Bowden plays Tina Fey’s ditsy assistant, Cerie, on NBC’s 30 Rock and sat down with SheKnows for an exclusive chat about the May 20 finale starring Matt Damon and Michael Sheen! 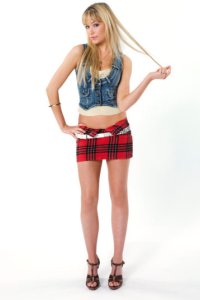 Bowden was acting on TV with small roles in Law and Order: Special Victims Unit and One Life to Live when she was cast in Fall Out Boy’s video for Dance Dance. Instantly recognizable, she caught the eye of 30 Rock’s casting director and the rest is history.

She is an award-winning actress as the cast took home the 2009 Screen Actors Guild Award for Outstanding Performance by an Ensemble in a Comedy Series. To say Bowden feels lucky to be a part of Tina Fey’s world is the understatement of the year.

30 Rock: Back to the beginning

SheKnows: 30 Rock really has caught on of late. What was it like at the beginning when you all knew you had something special, but the ratings weren’t there yet?

Katrina Bowden: We were all just very excited in the beginning — we had something great. It had such great potential, but no one watched the show, no one knew what it was. We had a fear of being cancelled, which comes in the TV world. Shows start and get cancelled kind of quickly. Suddenly, the ball started rolling. The critical acclaim we always got turned into higher ratings. People started watching the show [laughs]. It was always fun and a great energy on set from the beginning. What’s amazing is after the struggle, it’s that much more of an amazing feeling winning the awards for something you’ve worked so hard at.

SheKnows: What is life like on the set of 30 Rock? Do you all have a hard time getting through a take cracking each other up? 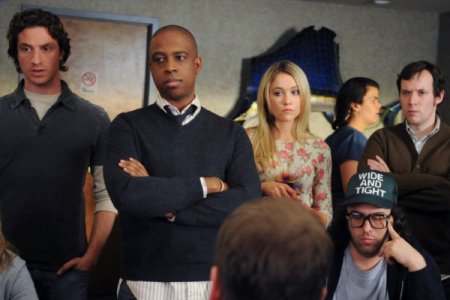 Katrina Bowden: It’s a laid-back atmosphere, as laid-back as a set can be — rushing and waiting, rushing and waiting [laughs]. It’s a big family, it’s a tight knit group. We joke around a lot and have a lot of fun. It’s funny, I look forward to it. I know I’m going to have a great time at work.

SheKnows: When you first auditioned to be on 30 Rock, what did you think of your character’s name, Cerie Xerox? Was it a little odd?

Katrina Bowden: I know [laughs]! I didn’t know how to pronounce it. It was interesting and totally different. Having a last name of Xerox as an assistant is kind of funny.

SheKnows: How did you so perfectly nail your character? Do you happen to know anyone like her?

SheKnows: Working with Tina, such a brilliant mind, what has it meant to you personally and professionally to spend time with such an inspiration?

Katrina Bowden: She’s been a great role model. She is a great role model for young women. She is so funny and so smart. She’s a mom and in the eyes of the world, she can do wrong. Tina does things gracefully. It’s hard to come by in this business. I look up to her. 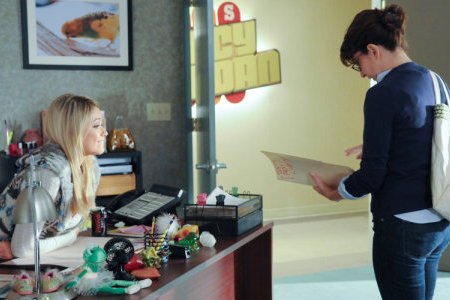 SheKnows: And working with Alec Baldwin, what have you taken away from that experience?

Katrina Bowden: I was nervous to meet him. He is such a nice guy. He’s so funny and he definitely has this way about him. He walks in and gets the attention of the entire room. He’s one of those people — he doesn’t go unnoticed. It’s a strong quality about him. He’s so down to earth and funny.

Katrina Bowden: Yeah, I was and I always will be.

SheKnows: What did you find the music video filming experience like as opposed to a 30-minute sitcom. Was there a learning curve for you?

SheKnows: Your character seems to be the hippest person on The Girlie Show set. What are your fashion inspirations?

Katrina Bowden: I’m pretty easygoing about it. I really always loved what Kate Moss does with style, that kind of thrown together effortlessly look. I also gravitate toward the classic Audrey Hepburn type look — sophisticated and adult, well put together. I have so much fun on the red carpet! That’s like a dream [laughs], to get all dressed up in a gown. I get to be a princess for a day.

SheKnows: Have you found that people approach you in some ways thinking you are your 30 Rock character? Do you find people can’t separate the two?

Katrina Bowden: Yes! Oh my God, yes. I’ve had encounters, less now than in years past. People come up to me and are surprised I don’t dress like her in real life. I’m not like my character at all.

SheKnows: You’ve also had the honor of working on a film set. Do you prefer films to TV, or are you simply just happy to work?

Katrina Bowden: I would love to do more film. It’s a different experience than being on a TV set. On TV, like with 30 Rock, it’s a tight-knit set. We have all the same crew members day in and out and you get used to it. It’s like a family. But, on a movie, you’re kind of pushed into new situations with new people where everyone has to get along really quickly. Then, you’re there for months together and go your different ways. It’s kind of sad to leave a movie set. You form such close relationships. 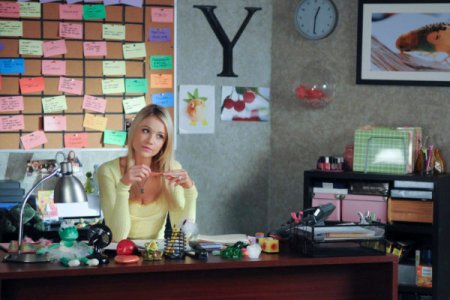 SheKnows: Did you get to meet Dennis Hopper on the set of The Last Film Festival and what was it like being directed by Linda Yellen?

Katrina Bowden: Linda is wonderful. She is so talented and so nice. She’s one of the easiest people to work with. That was really, really fun. It was also a great cast on board. I worked with Dennis Hopper! It was great. He’s such a good actor. I was very impressed.

Read on for more 30 Rock