Dancing with the Stars heads into its finale with the show’s commercials making it seem like, “It’s anyone’s Disco Ball.” In fact, that’s just a load of feather and sequin-studded garbage. 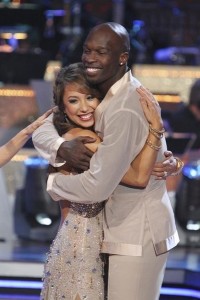 This season of Dancing with the Stars has been the least suspenseful ever.

Last night, Bengals football star Chad Ochocinco and his partner Cheryl Burke exited the ballroom, leaving the final three couples to battle it out. Or, at least for two couples to jockey for second behind the dancer we pegged as this season’s winner the moment the cast was announced — Pussycat Dolls frontwoman, Nicole Scherzinger, and her partner Derek Hough.

Sure, Olympic figure skating golden boy Evan Lysacek has moves and twirls, but Scherzinger learns choreography, dances and performs for a living. The fact that she was even let into the competition in the first place has always seemed grossly unjust to us. She and Hough can pull that mealy-mouthed, “Ah gee, ballroom is a totally different style of dance” baloney all they want, we’re not buying it.

Just YouTube the video for Buttons or When I Grow Up, and it’s plain to see, Scherzinger can dance her insanely toned butt off.

Len Goodman, the Simon Cowell of ABC’s Dancing with the Stars, flat out proclaimed, “If [Nicole’s] not in the finale, something is wrong with the world.” And Evan Lysacek, with his partner Anna Trebunskaya, even admitted, “Derek and Nicole had dominated since the beginning of the season so for us to step up to their level, that’s what we were working for.”

At least Lysacek and Trebunskaya, who were chosen for last night’s encore to re-perform their Paso Doble, can rest well assured that they’ll have the distinction of finishing second to a ringer.

Meanwhile, ESPN’s Erin Andrews and Maksim Chmerkovskiy, who round out the top three, have put up a valiant effort this season but their chances of taking home the disco ball trophy are slim to none. First of all, Andrews’ target demographic and fan base aren’t major DWTS watchers, second, while she’s a beautiful statuesque blonde goddess, Andrews lacks Lysacek’s grace or Scherzinger’s charisma and showmanship. Sorry, kids, you’ve had a good run, but it’s the bronze for you.

You can tune in to watch Scherzinger and Hough (yawn) claim their trophy like it’s coupon day at the Five and Dime, during the Dancing with the Stars two-night finale next week, Monday, May 24 and Tuesday, May 25.

Don’t miss a second of Dancing with the Stars on Reality TV Magazine!