John Travolta and Kelly Preston just received the greatest news they’ve had in years: They are having another baby. 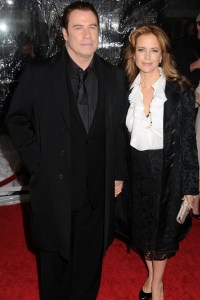 The couple announced the pregnancy via People and on their websites.

“It’s impossible to keep a secret, especially one as wonderful as this,” they said in a statement. “We want to be the first to share this great news with everyone that we are expecting a new addition to our family.
Love, John, Kelly and Ella”

The family has had a horrifically difficult couple of years, starting with the death of 16-year-old son Jett in January 2009, followed by a court battle over extortion involving Jett’s medical care and culminating in the deaths of their two beloved dogs in a recent freak accident. It’s little wonder they fought so hard to bring another light into their fold.

And a fight it must have been. The chances of 47-year-old Kelly conceiving naturally are slim.

Chances are she, like many women her age who want to get pregnant, resorted to IVF with donor eggs. That or whatever weird Scientology ritual they do over at the LA Celebrity Center involving barley water and Tom Cruise jumping on couches.