When the ABC comedy Cougar Town premiered, it drew a lot of older women hoping to get tips on how to prowl for younger guys and younger guys who prefer hot (as in, Courteney Cox) older women. As Cougar Town goes into its season finale on May 19, Jules the cougar has pretty much abandoned the hunt to zero in on handsome Grayson (played by Josh Hopkins), leaving both the network and fans to wonder if the show’s name should change.

We recently grabbed a few minutes with the show’s very funny comedy duo Brian Van Holt (Bobby) and Ian Gomez (Andy) at the ABC building in Burbank to get a take on the possible re-naming. We also wanted a take on what it’s like to work with co-star Ms Cox, who is also executive-producing the comedy. 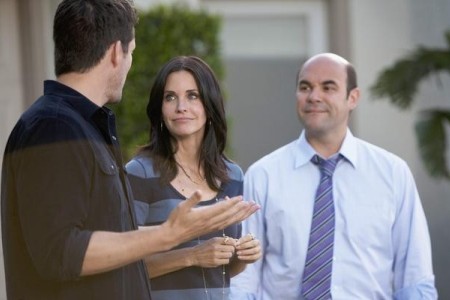 We got way more than we bargained for. These guys are just as hilarious in person as they are on the show, spilling on-set secrets about kissing the boss’s wife and who spends the most time in the make-up chair. Tune in….

SheKnows: There is talk of re-naming the show because the cougars don’t seem to be on the prowl right now. What would your choice be?

Brian Van Holt: What About Bobby?

SheKnows: The Bobby Show… but seriously.

Brian Van Holt: I think the reason [there is talk of changing it] is that it’s not about cougars anymore. And, the name kind of turned some people off to the show.

Ian Gomez: The show’s doing pretty well, but if they were to change it, I like What About Bobby? or Why Is Bobby So Stupid? Or Hot Women, Sexy Men.

Brian Van Holt: Me and Ian Going Down the Boulevard. No. I like Cougar Town. I’m scared to talk about this because I don’t know where we stand. This is all new. We’re not really informed on all that stuff. It’s not about cougars; it’s more about a family. Or else it’s a nature show.

Ian Gomez: I thought it was a nature show, too.

SheKnows: But, given that you signed up for something called Cougar Town, has the show turned into something you really didn’t sign up for?

Brian Van Holt: I just signed up so I could say Cougar Town. Cougar Town. I love it. It didn’t change from my idea or my expectations. I don’t think it ever was geared toward older women dating younger men. It was originally supposed to be a family show about a dysfunctioning but functional family.

Ian Gomez: Well, the pilot was about a woman who was recently divorced, and she’s older and gonna date younger men. But I think they realized that, after a while, that’s gonna get kinda boring, and it’s gonna be the same thing every week. Then, it transformed into more of an ensemble thing about this group, this family and how they function dysfunctionally. Modern Family is taken, so we can’t do that. What else could we do?

Brian Van Holt: Do you have any suggestions?

Brian Van Holt: Oh, Friends with Bennies. I like that!

SheKnows: Well, Ian, you do the scenes with the boss’ wife (Christa Miller). So does [her husband and producer] Bill Lawrence come down on the set when you…

Ian Gomez: Yes, Bill Lawrence does seem to make an appearance whenever there is kissing going on, although our kissing is not extremely passionate kissing like there is on the show. It seems like everyone is getting some free kissing except for me.

Brian Van Holt: Are you kidding me? I get animals. I don’t get any girls!

Ian Gomez: I had a dog sit on my head.

Ian Gomez: Okay. But Bill (Lawrence, creator) does come by, and he kinda likes it. He likes the uncomfortable feeling.

Brian Van Holt: Ian actually likes it most. He pushes that envelope. He loves it.

Ian Gomez: I like to poke the bear a bit.

SheKnows: Tell me a secret from the set. It can be anything.

Brian Van Holt: I write my lines on Courtney’s forehead. No.

Brian Van Holt: What you see is what you get. There’s no secrets with me. I don’t know any secrets. Wish I had one to tell you.

SheKnows: Who spends the most time in the makeup chair?

Ian Gomez: I consume more makeup as a by-product of my lack of hair. But, of the men, who is in the makeup chair the most? I think Dan Byrd [who plays the teen son] because he is very pale, and they have to make him look like he lives in Florida, so they have to tan him. He needs a little beauty time.

SheKnows: Don’t worry about it. You guys have become such a good comic team. Did that just come from your personalities, or is it written?

Brian Van Holt: I had to coach this guy. I had to guide him and teach him.

Ian Gomez: Well, I think it’s because we’re kind of opposites, physically, and our characters are, too. So, putting them together is a good comedy mixture.

Brian Van Holt: He’s very easy and fun to work with, so I think we have a natural…

Ian Gomez: Is this the stroking section?

Brian Van Holt: He’s very generous to work with, and there’s chemistry between us. [He puts his arm around Ian.] I like you.

Ian Gomez: [Looking doe-eyed] I like you, too. I think when they cast the show, Bill and Courteney knew what they were doing. We grew and vibed very well, this cast. I think they did a great job.

SheKnows: Let’s go back to the wine. Do you have preferences?

Ian Gomez: It has to be wet. I like it in a liquid form. I like red wine. I like cabernet, but if it’s not wine or beer, then I prefer bourbon. But we don’t get bourbon on the set. That would be too much.

SheKnows: How is working with Courteney? Is she more hands-on because she’s also producing or….?

Ian Gomez: For the first month and a half, I was afraid to approach her. Not because she was standoffish or anything, but it was like “Wow. That’s Courteney Cox!” She’s my boss. Finally, she came up to me and said, ‘”I always have to say hello to you. You never say hello to me first. I want a big hug, and I want you to embrace me and say hello.” So, she broke the ice and she does that with everyone. She wants everyone to feel comfortable.

Brian Van Holt: So now you guys are “dirty dancing.” Courteney is very grounded and down to earth. I was very surprised at how normal she is. She’s lovely. We’re lucky we get to work with her for sure. And she’s hands on and smart and talented. And, she’s not bad on the eyes.

Ian Gomez: And she’s easy on the eyes, and I like pinot noir from the Russian River Valley….

[And the conversation devolves into where the best pinot noir comes from, and each actor complaining that the other is “grabby” or “always grabbing me on the butt” as we move them closer together for pictures.]

Brian Van Holt: I’m a touchy-feely person. I always grab him on the a** and he hates it!