Steve Carell is considering an Office exit after season seven. Nothing’s in stone, but The Office is preparing to continue with or without his wacky character, Michael Scott. 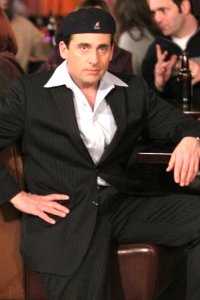 In a BBC Radio interview, Carell revealed that his contract is up at the end of next season. “That will probably be my last year,” he said.

It’s no surprise that this tiny snippet spread like wildfire. Carell offered a bit of an explanation in early May, reiterating his tentative plans to exit after May 2011.

“We’ll see,” he told Access Hollywood. “It’s funny that, apparently, that got all sorts of press. But yea, next year’s my last season on my contract. It’s sort of what it’s looking like, right now. It’s not a negotiating tactic at all. It’s just, I want to spend more time with my kids right now. That’s really what it’s about.”

NBC wasn’t talking, but now, with the Up Front week in full swing, the net’s Primetime Entertainment President Angela Bromstad reveals, “We hope we can keep him around for a long time.”

Keeping him around, however, may mean keeping him on the network, but not on The Office. NBC had its eye on Carell’s upcoming remake of the 1970s hit detective series Rockford Files, starring the likes of Dermot Mulroney and Beau Bridges. Updates this week, however, suggest the net has lost interest in that venture but still hopes to work with Carell’s production company, Carousel Television.

Regardless of what happens with Carell, NBC has no plans to cancel The Office.

“The Office is a great ensemble show, and the producers are preparing in the event he chooses to move on,” NBC Universal Television Entertainment Chairman Jeff Gaspin said.

Since taking on the role as The Office big boss and awkward oddball Michael Scott, Carell has made it on the big screen as well, with hits like The 40 Year Old Virgin, Get Smart and Date Night, which is still in the box office top 10 this week.

Clearly, he doesn’t need The Office, but many argue that the mockumentary needs him.

Do you think The Office can move forward without him? Leave a comment and let us know!