John Travolta and his family are facing tragedy yet again after the death of the family’s two dogs. 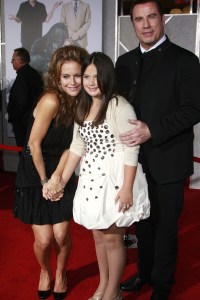 While nothing compares to the loss of a child, losing a family pet can often feel like losing a family member and last week two of Travolta’s dogs were killed in a freak accident at an airport in Bangor, Maine, according to the Bangor Daily News.

On May 13, shortly after landing at Bangor International Airport, near the Travolta’s home, an assistant was taking the two small dogs for a walk when an airport service vehicle struck and killed them.

The city released a statement to the newspaper: “An airport service pickup truck was approaching the airplane to service the airplane and did not see the dogs. Unfortunately, the dogs were struck and killed. The airport is investigating the accident. Out of respect for the family’s privacy the city will make no further comment.”

It is unclear whether any charges will be filed against the unnamed employee. Luckily, the assistant walking the dogs was unharmed.

Travolta has been very open about the fact that he turned to Scientology to deal with tragedy, which the actor has had to endure more than his fair share of in life.

In 1977, his then-girlfriend, actress Diana Hyland, his co-star in The Boy in the Plastic Bubble, passed away from breast cancer. On January 2, 2009, Travolta and Kelly Preston’s 16-year-old son, Jett, suddenly died while on vacation with his family in the Bahamas.

Jett had long suffered from a seizure disorder, sometimes having as many as five grand mal seizures a week. He reportedly hit his head in the bathtub either from a seizure or causing him to suffer a seizure. Paramedics attempted to revive him but he was pronounced dead on the scene.

Our heart breaks for John, Kelly and their 10-year-old daughter, Ella, who’s probably inconsolable right now. Seriously, L Ron Hubbard, cut this family some slack. Haven’t they been through enough?

Read on for more John Travolta