Invictus earned Academy Award raves for Best Picture, as well as acting nods for Best Supporting Actor for Matt Damon and Best Actor for Morgan Freeman. Freeman has been waiting years to portray the South African president and symbol of aparthied resistance, Nelson Mandela, and in Invictus, Freeman finally has his moment with a powerful story to match. 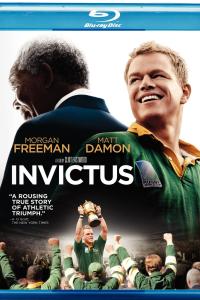 When Nelson Mandela first took office as president of South Africa, he faced a divided country after decades of racial separation and strife. Instead of steering his country toward revenge and accountability, Mandela sought common ground for his newly unified country.

After 27 years in jail, Mandela could have taken a different path. Instead, he chose to find something that can show that there is no black, there is no white, there are only South Africans.

The Rugby World Cup landed on his lap. South Africa was hosting the tournament and Mandela believed that a miracle victory of the tourney would be the galvanizing force he needed to bring South Africa together.

In Invictus, Damon portrays the real-life rugby captain who is approached by Freeman’s Mandela and informed of his wish. After the initial wow factor wears off from meeting the revered leader, Damon realizes the task at hand is much more difficult than Mandela believes.

But that is what makes Invictus such an incredible story — the entire tale is true. History has shown how that World Cup concludes and time has also shown the great ability Mandela had at bringing his country together after its divisive past. There is nothing Hollywood screenwriters could dream up that can compare to what happened on a rugby field in South Africa in the days after aparthied.

Damon turns in one of his most powerful performances to date and deserved his Oscar acting nomination. But Invictus is Freeman’s movie from beginning to end.

After meeting the leader soon after he was sworn in, Mandela let Freeman know he was the man to portray him should a film ever be made on his life. Since then, Freeman told us, he was always on the search for the perfect Mandela movie. A regular biopic never quite came together. When the story of the South African rugby team’s Cinderella-story run through the World Cup came to the Oscar-winning actor’s attention, he knew he had his Mandela movie.

“In 2006, I believe, we got this book proposal (Invictus) from John Connor. It was perfect,” Freeman said. “We bought it, we got a script written and this was the role to play to give the world an insight into who Mandela is and how he operates.”

SheKnows is proud to present an exclusive clip from Invictus in honor of the film’s May 18 arrival on Blu-ray, DVD and digital download.