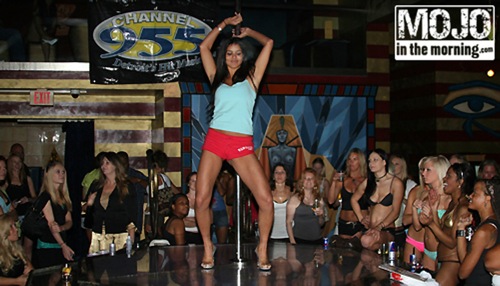 “It was held at The Coliseum strip club,” head DJ Mojo told Star magazine. “The strippers there taught the contestants how to do moves like booty poppin’ and pole dancing. Rima told us at the time that she was a model — and her routine was awesome! She definitely deserved to win.”

The radio station posted photos of Fakih working the pole on their website, much to the chagrin of the Miss USA organization, who is weary of weathering scandals of Tara Conner and Carrie Prejean proportions.

“We got phone calls from the Miss USA people and they’re p—ed off! We asked if Rima’s going to be in trouble over these photos, and they would not comment on it. We would hope she won’t lose her title,” said the DJ.

But no worries as of yet — Donald Trump, the head of the pageant group, says 23-year-old Rima will keep her crown. “Obviously she has great imagination but she’s fully clothed and a high quality person,” Trump said. “We back her to the hilt.”