Harrison Ford and Brendan Fraser star in Extraordinary Measures, a true story that lands on home video May 18 and we’ve got an exclusive clip! 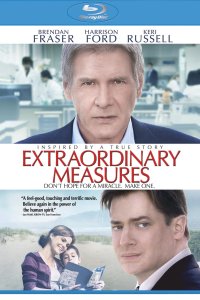 Ford and Fraser are an unlikely pair in Extraordinary Measures, but fate and the survival of children with a rare genetic disease brings them together.

Extraordinary Measures is the story of John Crowley (Fraser), a father who has two children with an incurable disease. He discovers that a scientist, Dr Robert Stonehill (Ford), has been working on a cure and is the researcher closest to producing a cure.

Keri Russell stars as Fraser’s on-screen wife, who excels in her role as the supportive mother who keeps the family together while Fraser criss-crosses the country seeking donors to support Stonehill’s research.

The film allows Ford to have a few classic shouting lines as only he can, such as “Get out of my lab!” But the actor never fully goes overboard by drifting into Dr Indiana Jones mode — which could have been an easy out for the actor.

Extraordinary Measures is based on the Pulitzer Prize-winning book The Cure by Geeta Anand. Anand’s book moved Ford and he immediately sought to bring it to the big screen. Ford also serves as executive producer on the film, and as such, his handprints are all over it — from the sweeping arc of work versus family to corporations out for profit instead of societal improvement. Extraordinary Measures is also a story of parents and the lengths they would go to in order to help their children.

The Blu-ray and DVD contain the usual deleted scenes, but the most fascinating bonus material on this home video release is the behind-the-scene footage and bonus featurette, including a look at the real-life Crowleys, which gives a resonance to an already moving story.

Read on for more Extraordinary Measures