Lindsay Lohan is due in court May 20, but Iceland’s volcanic eruption has her stuck in Cannes. Prison may be Lohan’s next big trip. 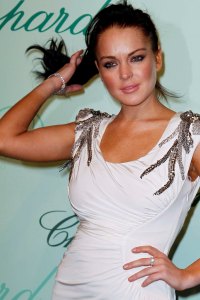 Instead of sending Lohan to jail after her infamous DUI arrest, LA judge Marsha Revel required she attend one alcohol education class per week. The move allowed Lohan an opportunity to get a handle on her addictions but TMZ is claiming Lohan has only completed 10 out of 13 classes.

There’s also chatter that Lohan has violated parole in other ways, so the judge wants her in court to answer for her actions.

“Lindsay’s doing her best,” her lawyer Shawn Chapman Holley told the TMZ paparazzo today. “She’s trying to make it back to LA for court.”

Holley also told TMZ her client will make the deadline, but it’s not like LiLo has any control over the volcano that’s thrown the European airports for a loop!

If Lohan doesn’t make that Thursday court date, the judge can file a bench warrant for her arrest and is threatening to do just that. What’s more, even if she makes it back to Los Angeles in time to appear, she could end up in jail if she hasn’t fulfilled her parole requirements.

“I just finished some more traffic school and my court date is coming up this week,” Lohan told Hollywood.TV on May 15. “I’ve been in compliance more than ever. It will take me about two and a half weeks to be finished completely, so I think it should go well.”

She noted that she missed one traffic school class for a family funeral, but didn’t mention the other two absences. Frankly, “more than ever” may not cut it!

Meanwhile, Lohan has been linked to a new leading lady, 36-year-old photographer and reality star, Indrani. This pairing would debunk the myth that Lohan’s romance with Samantha Ronson was just a phase, but Lohan hasn’t confirmed she’s taming her own cougar. Indrani, on the other hand, seems to be fueling the gossip fire.

“We have been spending a lot of time together,” she told the New York Post. “I have never had a relationship with a woman before, but Lohan is just somebody who I find fascinating, gorgeous and extremely smart, as well as super-hot.”

Hot or not, Lohan is certainly in hot water!