Miss USA has made history with its crowning of Miss Michigan! Proving that handling yourself well under pressure can be the most beautiful quality of all, Miss Michigan, Rima Fakih, was crowned Miss USA on Sunday night, despite tripping over her dress during the evening gown portion of the competition. 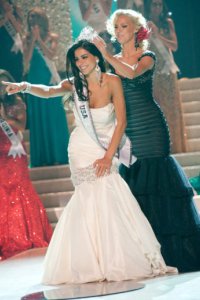 Joan Rivers, providing backstage commentary, said she suspected Fakih might have faked the stumble to get some attention. “I’m dying for her,” Rivers gasped, “but tomorrow she’ll get the headlines. She probably did it purposefully.”

Turns out, Fakih got the headlines anyway, not just for her win but because the 24-year-old beauty is a Lebanese immigrant. Fakih, who celebrates both Muslim and Christian faiths, was born into a powerful Shiite family in a village in southern Lebanon.

Fakih moved to the United States with her family in 1993 and attended a Catholic school in New York before her family settled in Michigan in 2003.

At a time when relations between America and the Arab and Muslim world are tenuous at best, having a woman who considers herself Arab-American representing the title of Miss USA for a year has much deeper meaning to many people. Some are elated while others are rushing to message boards to vent.

Miss USA has been getting much more political lately.

In 2009, Miss California Carrie Prejean, set off a firestorm when she answered a question about California’s same-sex marriage laws and defended laws banning gay marriage. Now Fakih’s win, which was largely based on her appearance in an evening gown and bathing suit, is inspiring some debate about the conservative Muslim practice of women wearing burqas or hijabs, robes meant to entirely cloak a woman’s body from everyone except her husband.

But none of that was stopping Fakih from enjoying her win last night in Las Vegas. She told reporters she knew she’d won because of the look pageant owner Donald Trump gave her as she awaited the results with the first runner-up, Miss Oklahoma, Morgan Elizabeth Woolard. 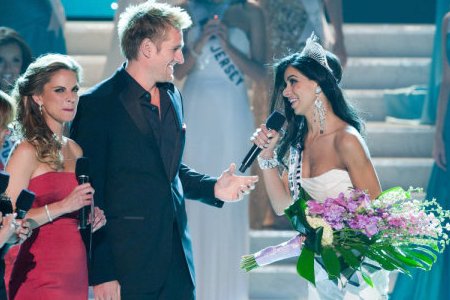 “That’s the same look that he gives Apprentice contestants when he says: You’re hired!”