Melissa Etheridge has returned with a new album, Fearless Love, and a view on life that remains unchanged after several personal challenges tested her mettle.

Etheridge is a cancer survivor and mother of four who fought her 2004 breast cancer diagnosis with a passion that drove her triumphant return, completely bald, to the Grammys in 2005. There, she delivered one of her best performances of all time: The Janis Joplin tribute for Piece of My Heart. Her drive to eliminate breast cancer not only from her life but from all lives has her still speaking out on the need for cancer research funding. 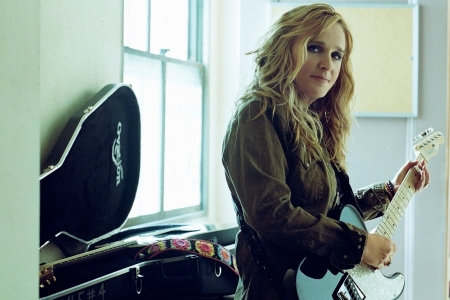 She is a tireless advocate for other causes, as well. Etheridge’s commitment to saving the earth spawned the song, I Need to Wake Up, from Al Gore’s An Inconvenient Truth. That track earned her Academy Award gold for Best Song.

She also has won two Grammys and an Oscar, and has had five platinum albums in her career.

She thanks her teenage daughter for the title of her latest record and single, originally titled Fear of Love. Etheridge’s daughter shook her head upon hearing the title and promptly suggested Fearless Love. “And she never lets me forget it,” Etheridge says with a laugh.

Fearless Love is currently the No. 1 rock album in the country. We guess her daughter deserves more credit than previously thought. 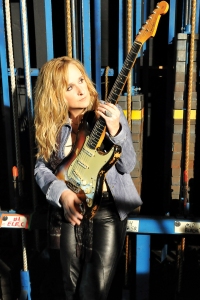 SheKnows: Fearless Love is not only the album title and first track — it’s also a current hit single. Did you know that would be the case from the get go, or were there other candidates? What is it about that song that so resonates with you personally?

Melissa Etheridge: When I started the album, I felt the project would be about fear and love. I was ready to call it Fear and Love — songs about fear and love — and my 13-year-old was very interested. She came up with Fearless Love. That is how inspiration is. You have to pull from wherever it comes, especially at home!

SheKnows: Fearless Love is your first album in two years. With such a devoted fan base, how has the reaction been for you upon the release in April?

Melissa Etheridge: I’m so grateful for my fan base, who trust me, believe that when I put out an album, they will like what they hear. I think my job is to stay truthful to myself — to love my work. If I can do that, the fans know they’ll love what I produce.

SheKnows: As a musician, you’ve had quite a career, but do you think you are still learning the art of music even today?

SheKnows: Some female rock artists have felt the pull to record a dance song. Has that bug ever caught you?

Melissa Etheridge: No, that’s probably the good news. I’m gay, so I’m into dance music and love going to discos. I love dance music! Some of my music is danceable, but I’m pure rock n’ roll. 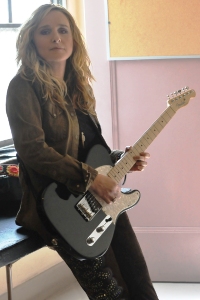 SheKnows: You have had so many honors and career highlights. Is there one that stands above the others and why?

Melissa Etheridge: I’m so grateful for everything. Singing with my hero, Bruce Springsteen, is one; singing on the Grammys in 2005 (after battling cancer) is the other.

SheKnows: What songs of yours are favorites to perform live?

Melissa Etheridge: Like the Way I Do — the audience always gets into it –and Bring Me Some Water. Honestly, the last hour of my show is one big awesome blast to play!

SheKnows: You’ve shared the stage with so many icons and up-and-comers who currently rock our world. Is there anyone out there who would qualify as a “dream collaboration” for you?

Melissa Etheridge: Plenty! Growing up, I was seeking out artists and singers who moved me. Barbara Streisand’s Funny Girl changed my life. Then there’s Robert Plant to Janis Joplin to Peter Gabriel, Roger Daltry — all these people open their souls and sing. People who lay it all out there on the line on stage: Bring me those people.

SheKnows: I have always had the highest respect for Island Records with its rich history from Bob Marley to U2. When you were first signed to the label, did you have to pinch yourself? What has it meant to you over your career to be an Island Records artist?

Melissa Etheridge: Yeah, I didn’t know much about them at first. [Island founder] Chris Blackwell saw me and thought he saw something. I was thrilled. The music Chris brought to the world including Free, Stevie Winwood, Bob Marley, U2 — I thought, “Wow. This guy just loves music.” It is an honor to be a part of that label.

SheKnows: I see you are out on the road and will continue to tour for this record through the summer. Is performing live still an important aspect of your career?

Melissa Etheridge: Yes. It’s the payoff. The traveling around is hard. Once you’re there, the shows, that’s what it is all about. Getting up in front of my fans, performing live — it is one of the best feelings in the world.

SheKnows: How has the art of songwriting changed for you over the years? Or has it?

Melissa Etheridge: I’m still the go-in-my-room-with-my-guitar songwriter. Me alone, a notebook and my guitar. Nothing’s changed.

SheKnows: Your parents were huge in your making it from small-town Kansas to big-time rock star.

Melissa Etheridge: It’s so incredibly wonderful to have parents who are supportive. That’s the biggest thing, because only one in a million makes it. They felt that, as long as I was self sufficient, I would be fine. They weren’t overly “you’re so good” with me, because they knew I would always try to get better. They let me do what I do.

A face of cancer 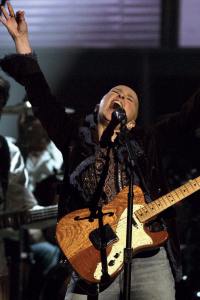 SheKnows: As a cancer survivor, you have put your name out there to support the cause of raising awareness and the search for a cure, but you also speak out on a number of other world issues. Why is that important to you when many might be tempted to stay quiet and not alienate anyone?

Melissa Etheridge: I don’t have a fear of what people think of me anymore. Being truthful and stepping up for what I believe is the best I can do. I’m not here to make people comfortable. I just need to love myself and have no fear.

SheKnows: Was there any discomfort in sharing yourself with the world, even at the beginning? As a songwriter, you really wear your life and your emotional state of mind on your sleeve.

Melissa Etheridge: No, the music was the place, a safe place I put my emotions. I can be more emotional in song. Hey, I grew up in Kansas. We do not talk about feelings. In my songs, I get that emotional release.

SheKnows: Has being a mom altered your view on the role of career in your life?

SheKnows: You are appearing on the breast cancer documentary 1 A Minute. What was that experience like for you? 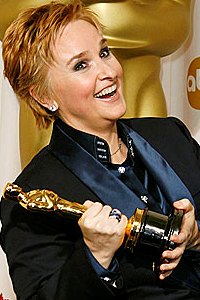 Melissa Etheridge: If I say “yes” to something, it has to resonate with me, and this one hit me. The woman behind it simply wanted women to speak their truth. I have so many thoughts about cancer that are outside the box and that people don’t want to hear. Many people feel that drug companies are going to make a drug and cure us. I simply don’t believe that is the only way.

SheKnows: Lastly, did you ever think recording a song for a documentary about global warming would get you an Oscar?

Melissa Etheridge: When Al Gore called, I thought this film would only be seen in high schools with this little song at the end. An Inconvenient Truth was the whole journey — to go out into the world and change people’s views. It had me excited. When I wrote the song, I didn’t want to write about global warming. I wanted to write a song about waking up. Letting the world know it needed to wake up.