The newest update in the Tiger Woods marriage fiasco is Elin Nordegren hired a lawyer back in January, and that lawyer’s firm has been accused of leaking info to the press! 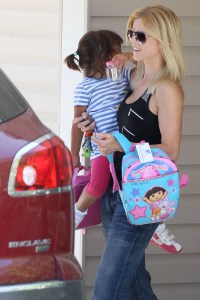 There’s been much chatter in recent months about Nordegren interviewing and tapping lawyers, but those stories may have been misleading. According to TMZ, Nordegren actually hired London-based attorney Walter H White all the way back in January and things are getting ugly among the estranged couple’s lawyers.

“Recently we have been accused by the other side of leaking information to the press,” White wrote in an email to his staff. “While we do not believe that anyone in the firm has been responsible for the leaks, we are aware that this is the second time that we have been so accused.”

If there wasn’t a leak when that was written, TMZ has clearly found one — assuming of course their email is legit! The gossip site maintains that it contacted White’s firm about the emails it uncovered, only to get its hands on yet another company email.

“To some extent it is a surprise and a tribute to the office and the firm that it has taken them so long to figure this out,” it allegedly says.

Word on the news circuit is that Woods and Nordegren plan to move forward with their divorce in Swedish courts, in order to keep things private as they progress. Unfortunately, privacy does not seem to be in the cards for this pair.

The distribution of their assets interests many, but custody is said to be the primary issue for the pair. With rumors that Elin wants to move back to Sweden, Woods has been linked to a few lawyers, including Thomas Sasser, an expert in multiple jurisdiction child custody.

According to some news outlets, the pair is in agreement about joint custody of daughter Sam, 2, and son, Charlie, 14 months, and hopes to keep things copacetic. But other publications seem to suggest the custody negotiations are turning into a battle.

Meanwhile, things aren’t going much better for Woods and his day job as the world’s best golfer.

After making a mediocre return to the course for the Masters, Woods missed the Quail Hollow Championship two weeks ago and then bowed out of the Players Championship on Sunday, citing his neck injury.
“For me not to play all 18 holes [at TPC], that was as angry and as frustrated as I’ve been in a long time,” Woods said in a statement about the TPC. “I’d been away from the game for such a long time, then came back and ramped up really quickly in order to try and play the Masters. The body wasn’t quite ready for that. I’ve been playing through it. I can’t play through it anymore.”

Woods addressed the press about his injury and how it makes playing impossible. “I know playing doesn’t help it,” Woods told reporters. “I’m having a hard time with the pain. There’s tingling down my fingers on the right side. I want to practice, I want to play, I want to compete, but this is not allowing me to do the things that I need to do on my golf swing to hit the proper shots.”

In the wake of that news, his coach Hank Haney resigned Monday, apparently via text message.

“I believe at this time that it is in both of our best interests for me to step aside as Tiger’s coach,” Haney said in a statement to the Golf Channel. “I will always look back upon our past half dozen years together as my best days in professional golf.”

Word is that in spite of all this, Haney expects Woods will make a big comeback once he can get past the drama resulting from his sex scandal. At this point, it’s hard to imagine he’ll ever get out from under this scandal, but you never know…

In the meantime, SheKnows will keep you posted on the twists and turns of this real life soap opera.