Iron Man 2 maintained its box office reign, but takes a hit from Robin Hood. Russell Crowe and Ridley Scott’s origins-story, Robin Hood, lagged just behind Iron Man 2 in the US, but is making huge money overseas. 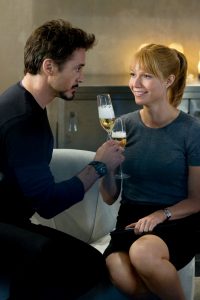 While Iron Man 2 kept the coveted number one spot this weekend, it saw a 59-percent drop in sales from its impressive opening weekend. That may not portend well for the superhero’s reign in the future, but for now, he’s banked $212.6 million in only 10 days and is still on top with this weekend’s $53 million.

Robin Hood didn’t get the big open it had hoped for domestically, coming in second with $37.1 million. Ridley Scott and Russell Crowe’s high budget flick still has some celebrating to do, however. The warrior version of the British hero fared much better on the international market, especially in Great Britain, where the story takes place. It soared overseas, bringing in $74 million.

There’s a big drop to third place, with Letters to Juliet opening at $13.8 million this weekend. Not a bad start, unless you compare it to Amanda Seyfriend’s last romantic vehicle, Dear John, which opened at $30.5 million. It may just have been too much romance from the cutie too soon.

The Queen Latifa-Common rom-com Just Wright opened at fourth, with $8.5 million; while How to Train Your Dragon stayed in the game, making the top five with $5.1 million.

The bottom five are listed below. Sadly, SheKnow’s fave Babies dropped out of the top 10, barely bringing in $1 million this weekend.

Next weekend, Iron Man 2 and Robin Hood will take on an ogre of a movie — Shrek Forever After hits theaters and has its eye on the top spot. Even coming out of the gate with mixed reviews, it will likely take the lead.

SheKnows can’t imagine what kind of opening MacGruber can expect, but we’ll be sure to let you know how that one goes!