Either Heidi Montag and Spencer Pratt are pulling their best PR stunt ever or Montag and Pratt have both gone off the deep end. 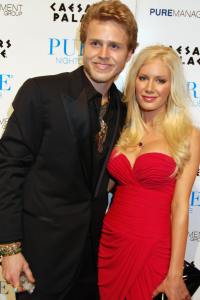 If you’ve taken a recent trip down any checkstand, you’re probably aware that Montag underwent a psychotic ten plastic surgery procedures in a single day. Now her husband, Spencer can be seen weekly on The Hills slowly unraveling, babbling about crystals and alienating everyone around him with his rage.

At first glance it might seem like more typically staged bad behavior for the MTV hit series, but according to reports, things are serious and going from bad to worse.

On Thursday, Montag called the cops and is threatening a restraining order against her mother, Darlene Egelhoff, who showed up hoping to help her daughter. Pratt has estranged himself from his younger sister, Stephanie, and won’t speak to his mother and father.

Now, in equally crazy retaliation, his parents are washing their hands of him.

“They noticed him changing two years ago and stayed by his side. But now it’s too much,” a source says in this week’s Us Weekly. “They even took the pictures of him out of their home.”

The report also claims Pratt, 26, and Montag, 23, have become virtual shut-ins at their $7,000-a-month rented LA house, which is filled with framed covers of magazines featuring them.

No one visits and the couple rarely leaves. “Heidi sits and stares in the mirror, while Spencer plots and schemes on his projects all day,” says a source. “He sits on the Internet, watches TV and tries to get press. That is all he does. It’s totally sick.”

“I actually think he’s kind of lost it a little bit,” Jenner, 26, admitted. “Lately, it’s hard for me — even as someone who used to be best friends with him — to see what’s real and what’s not as far as he goes. I see he wants attention.”

Jenner also said Pratt has gone “crazy with those crystals,” which Us Weekly reported cost the Pratts $400,000.

They don’t have that kind of money to burn now that they’re both unemployed. Spencer was suspended from The Hills after threatening to kill a producer and Heidi’s role was reduced after she objected to a faux-divorce story line. Show creator Adam DiVello said he “doesn’t think Heidi and Spencer will come back for the series finale.”

They’re gonna need to come up with a better shtick than the crazy act if they want to get another job. Breast implants don’t pay for themselves and Montag has repeatedly said she wants to go under the knife again so she can be an H cup. Yeah, okay, maybe they are just flat out nutters.

Read on for more Heidi Montag