It appears Matt Lauer is heading for divorce court. 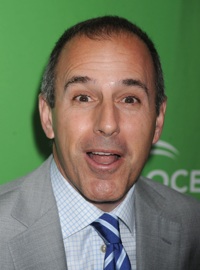 According to the National Enquirer (who, believe it or not, is right more often than not) Lauer and Annette, his wife of 12 years, are on the verge of a final breakup because the newsman can’t keep it in his pants. The couple has been living apart for more than two months.

Matt was a very, very bad boy at the Winter Olympics — even worse than that snowboarder getting his half pipe bronzed. In fact, Matt was seen nuzzling up with at least two female Canadian broadcasters and stood up his own wife on Valentine’s Day because he wanted to stay in Vancouver and get some more action, even though the rest of the NBC crew went home.

Annette is not having it. After being alerted by the wife of another staffer, she got the names of the women in question and confronted Matt. He, of course, did what any self-respecting cheater does: deny, deny, deny.

Despite the fact that Annette has caught him cheating and forgiven him before (he had an affair with a married woman two months before their wedding, which Annette found out two years into their marriage, and she nearly divorced him in 2006 when she was pregnant with their third child because she couldn’t trust him), this time she kicked him to the curb.

“Matt is trying to keep this [split] on the down low,” says a source. “Matt is still very involved in his children’s lives. He goes to the family apartment after he finishes his Today duties to see the kids — and picks them up from school. For their sake, he and Annette plan to continue getting together on weekends — and they’ll go to their house in the Hamptons.”

Look for Lauer to check into sex rehab in five, four, three, two…