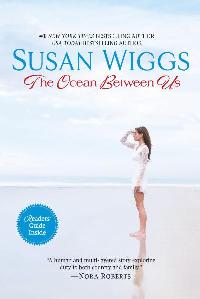 Grace Bennett is the perfect Navy wife with an officer husband and three children. But after 20 years, Grace, is tired of being that perfect Navy wife who has given up so much and she’s mulling over the choices she’s made. She wants her own home and she wants her own career — things being a Navy wife hasn’t allowed. She’s feeling altogether unsettled, but nothing is more unsettling than the secret her husband has hidden from her their entire marriage. Nothing, that is, until the accident on his Navy carrier shakes up her entire family.

SheKnows was thrilled to chat with this prolific author about the book, some fun and personal things about her, and even pictures of the view from her beach house and her daughter’s beautiful wedding.

SheKnows: Could you be a Navy mom? Why or why not?

Susan Wiggs: I definitely could. I’d be the mom who mails a package a day and Skypes obsessively in the middle of the night, but I would take pride in a kid who makes that commitment. When my daughter Elizabeth graduated from high school, she was offered an appointment to the Air Force Academy, nominated by two US Senators, so I did spend some time pondering this question. Ultimately, she opted for a traditional college, but I was incredibly proud of her for going through the process and having that option. Here’s the thing, your kid’s gonna do what your kid’s gonna do. Your job is to be the best mom you know how to be with the kid you’re given.

SheKnows: Tell us about Grace and how this character was born.

Susan Wiggs: Hmm. Well, my answer above is a partial explanation. I wanted to write about a woman whose kids are about to fly free. Just to make things interesting, I gave her twins, a boy and a girl, who are about to graduate from high school. The boy is expected to follow in his Navy officer dad’s footsteps. And of course, he has a mind of his own. However, Grace is more than a mom, and that’s part of her role in the story. She’s a woman in the middle of her life who finds herself consumed by restlessness, wondering if there’s something more for her. She was inspired by women like me — a good person who finds herself dealing with a bad problem.

SheKnows: Tell us about Grace’s husband, Steve, and what your favorite part of his character is.
Susan Wiggs: I loved Steve from the start, which is a good thing, because he does and says some truly bone-headed things that get him in big trouble. However, at his core, he is selflessly devoted to his family and, in the Navy, to the men and women under his command. He demonstrates this quality in scene after scene, beginning with the very first one in the book. I think that’s my favorite thing about him — his sense of devotion. The decision he makes at the end of the book is controversial with readers, but I think it’s very consistent with who he is. Readers who are curious about the roots and backstory of Grace and Steve are in luck — there is a bonus story available that dramatizes their life as a young couple. The Story of Us is widely available in digital format.

SheKnows: The book is set in the Puget Sound area and Grace finds her dream home looking out onto the water. What is your dream home like?

Susan Wiggs: I’m incredibly lucky to have found it — a beach house on the water. I think the place where I live explains a lot about this book. When I look out the window, I see this or this or this — it’s quite dramatic!

SheKnows: Grace is not only a Navy wife but also the mother of three — twins and another daughter. How many kids do you have and how do you juggle being a prolific and bestselling author and mother?

Susan Wiggs: I have one daughter who was married last year. [Susan shared her daughter’s beautiful wedding album with us here.] Elizabeth grew up, quite literally, in the knee-hole of a giant postmaster roll-top desk, where I wrote my books when she was little. Just to make things even more interesting, I also held down a full-time teaching job at this time. I juggled work and motherhood the same way working moms have always done — running on no sleep, caffeine, and the joy of raising this amazing little person. The juggling act is not easy, but the rewards are so very, very sweet.

Up next, Susan dishes on the life of a Navy family.