In her new memoir, Spoken from the Heart, former First Lady, Laura Bush, opens up about some very private things including a never-before-revealed personal tragedy. 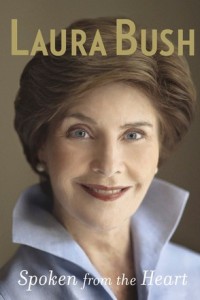 Most people have heard about the terrible car accident she caused as a teenager that killed a classmate of hers. But until now, Bush herself hadn’t talked about it.

Bush writes about the car crash from 1963 when, as a teenager, she ran a stop sign and hit another car. The other driver was killed and Bush was mortified when she found out it was someone she knew — a fellow high school classmate.

In Spoken from the Heart, Laura Bush describes how she was wracked by guilt and lost her faith for many years after the accident.

The rest of Spoken from the Heart is a pretty picture of Laura Bush’s life — growing up in a small town, her childhood and early adult years and eventually her courtship and life with former President George Bush.

The former First Lady defends her husband against Democrats who harshly called President Bush an incompetent leader and a loser. She’s gracious as ever and it’s a lovely peek into her life and history. But, other than the car crash, the memoir is not super revealing.

Bottom line: Even though speaking from the heart, Laura Bush is still a very guarded and private woman. But she opened up about some very painful things, like the accident, and if you’re a fan of this fascinating and understated woman — who champions literacy and education — you’ll enjoy this glimpse into her life and her history.

Review: out of five stars

Read on for more book reviews