Matt Lauer is the latest celebrity to be added to the list of husbands who cheat on their wives. The Today Show host has reportedly moved out of the house he shared with his wife, Annette Roque. 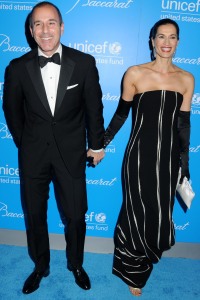 Last week SheKnows pondered if this whole celebrity-slimeball-cheating-phenomenon would ever wane.

But when we considered it, we never, ever, thought the next guy to join the ranks of Mel “Sugartits” Gibson, Tiger “Cheetah” Woods, Jesse “Bombshell” James, and David “Red Light Lover” Boreanaz would be Matt Lauer.

Yes, you read that right. Matt Lauer, Today Show golden boy, the man you drink coffee with every morning, has reportedly been stepping out on his wife of twelve years, Annette Roque.

Oh, Matt. Where in the world was your loyalty?

In a story first reported by The National Enquirer, the same rag which outed John Edwards’ mistress and love child, Lauer and Annette are said to have separated two months ago, after he cheated on her while covering the Vancouver Winter Olympics in February.

Troubles first arose when Matt, 52, decided not to spend Valentine’s Day with his wife, but instead remained in Vancouver after the Today Show crew wrapped production and returned to New York. That’s when he apparently “went wild” and “caught the eye of two good-looking Canadian broadcasters.”

Whether it was flirting or something more, Roque learned about it from the wife of another Today Show staffer and was none too pleased. When Lauer returned from his trip, he was allegedly confronted by his wife but denied any accusations. After an explosive two-day fight, Lauer moved out of the house and Roque is said to no longer be wearing her wedding ring.

This isn’t the first time the couple have hit a rough patch. They briefly separated in 2006, when Annette was pregnant with their third child, but she withdrew the divorce request after one month. The couple has three young children together, Jack, 8, Romy, 6, and Thijs, 2. They are said to be sharing parenting duties and spending weekends together for the kids’ sake.

Lauer’s ex-wife, Nancy Alspaugh, spoke with the Enquirer, saying, “I heard he and Annette are breaking up. I was not shocked to hear that but it’s very sad.”

So apparently there was already some trouble in paradise.

The question is: Did Lauer cheat? Or was his marriage already on the rocks? Because we’d really still like to believe that Lauer is a good guy.

Read on for more cheating celebrities