In her career, Robin Hood star Cate Blanchett has won an Oscar and been nominated four other times, appeared in the Lord of the Rings trilogy, channeled the great Queen Elizabeth and even stole scenes from the King of Hollywood himself, Brad Pitt, in The Curious Case of Benjamin Button. But nothing could have prepared her for the well-oiled machine that is the creative force of Russell Crowe and Ridley Scott.

Scott and Crowe have combined once again on Robin Hood, in theaters May 14, after successful collaborations in Gladiator, A Good Year and Body of Lies. 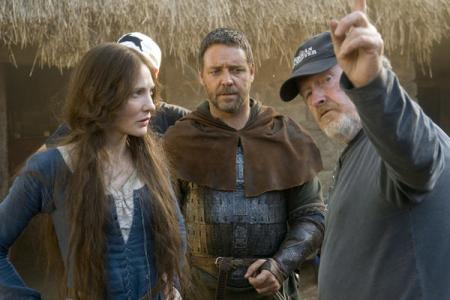 The Robin Hood origins story allowed Crowe and Scott — both co-producers — to craft a Maid Marion that was much more than window dressing for Robin and his Merry Men. In Robin Hood 2010, Marion wields a sword and shoots a bow and arrow as fiercely as any of Robin’s crew.

It hit Crowe that Blanchett was his Marion when the two were being honored in Australia with postage stamps. “Her demeanor, everything about her…I was kicking myself. Why hadn’t I thought of it before? Cate is a magnificent actress. She has resilience and a resonance. She’s tough, strong and single-minded. Every decision she makes is about truth. She has complete control over her emotional responses, so she can make the smallest gesture a gigantic statement,” Crowe said.

Scott, of all things, found Blanchett’s jovial nature her highest quality on set. “What I love about her is her sense of humor,” the director said. Her role is tough, but also allows for Blanchett to add an air of levity to the action brewing on the screen. Scott welcomed the opportunity to have Blanchett’s acting brilliance shine a light on his new view of the Robin Hood legend. 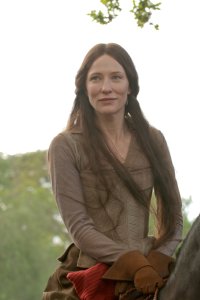 SheKnows: Did you have any apprehensions or nerves working with Russell Crowe and Ridley Scott, considering their long relationship?

Cate Blanchett: Because Russell and Ridley have such a long history together of making films that go straight to the heart of the matter, it was actually a very exciting combination for me.

SheKnows: Was the first day on the set a little nerve-racking?

Cate Blanchett: Actually, my first day on set I found it breathtaking. I felt like one of those little people in Gulliver’s Travels — I had suddenly woken up and found myself in completely another world.

SheKnows: The incredible attention to detail…

Cate Blanchett: Like the working water wheel at the chapel! It really makes my job very easy.

SheKnows: In this Robin Hood, the Marion and Robin relationship is truly given a spotlight. What do you think it was about Robin that finally won over Marion’s heart?

Cate Blanchett: There’s kind of a game-playing that goes on between Robin and Marion, that I hope is quite enjoyable for the audience to watch. There’s a buoyancy that exists between them. Ultimately, she really sets these series of tests that Robin continually passes. Finally, when he, without any prompting from her, plants the field — gets the grain and plants the field — something that has obviously been playing on her mind, I think she’s astonished by the act of generosity, that selflessness. That turns the corner for her.

SheKnows: I read you did your own stunts. Was that your idea?

Cate Blanchett: Ridley asked if I was game for it (laughs). If someone asks if you’re game for something, of course you’re not going to say you’re not! I wouldn’t say I’m a master horsewoman, but I do like riding a horse. They’re film horses (laughs), so they’re pretty well trained. But, it is a thrill. There is a sequence where Marian gets all chainmailed up and rides into battle — it was thrilling. You don’t get to do that every day. That’s the joy of making a film like this, you get to do these things that are adrenaline based.

SheKnows: So were Russell and his merry men ever too merry and testosterone heavy for you? 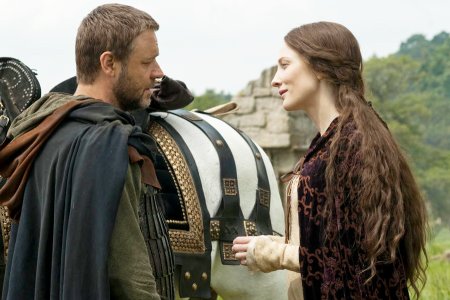 Cate Blanchett: Russell’s great. And all of his merry men were going all over England to pubs rehearsing (laughs). They’re a great bunch of guys and they really bonded. They know one another, they’ve all worked together. When they all get together and have a song, it’s all really, really buoyant. It’s by definition merry (laughs).

SheKnows: What do you think is at the heart of what would make Robin Longstride become Robin Hood, hero to the poor and downtrodden? 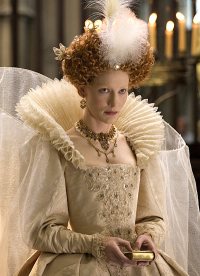 Cate Blanchett: You’ve got somebody who is returning to, kind of, an old fashioned type of values, morals, responsibility and loyalty. I think they’re quite noble sentiments to have in an age of merchant bankers ripping people off left, right and center. It’s quite timely, I think.

SheKnows: What drew you to join the world of Robin Hood and the Crowe and Scott tandem?

Cate Blanchett: There’s an enigmatic quality to Robin Hood. What makes him tick? Why does he decide to help people who are downtrodden? Why would someone do that? I think that’s something that Russell explores in that man’s backstory. Usually the films that I’ve seen, it’s just a given that Robin’s the way he is. I think what Russell and Ridley are concocting is what makes Robin Hood tick.