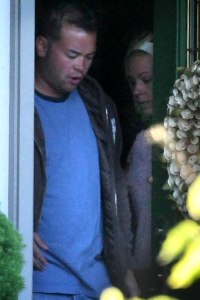 Alexis, Hannah, Aaden, Collin, Leah and Joel Gosselin celebrated their special day over breakfast with Mom, followed by an outing with Dad and their nine-year-old sisters Mady and Cara.

While the main events were separate, word is the whole family also spent some time together in honor of the special day. Photogs snapped a pic of the former couple together at Kate’s massive Berks County home. This marks the first time Jon and Kate have been captured on film together in months.

That said, Kate didn’t give the father of her kids any special mention in her birthday blog ramblings.

“I’m really reflecting these days…my six youngest children are turning six in only a few days!” Kate blogged. “I’m not really sure how that happened so quickly but it makes me happy but, also… well… sad!”

“To make my sadness worse, their birthday falls on the same day of the week that they were born — a Monday! And also, like the year they were born, it’s the day after Mother’s Day! I barely have to start thinking about that day and, yep, hold on, I have to grab a tissue. I gotta catch these tears before they smear my eye makeup!”

While there was that brief family reunion, Jon was not on hand at the pool party Kate threw on May 9. It was, for the record, 47-degrees in Pennsylvania that day, but SheKnows imagines that just made the heated pool and Jacuzzi seem all the warmer!

Fans may get a glimpse of the momentous reunion on Kate Plus 8, which is set to premiere on Sunday, June 6 at 9 pm, but we shouldn’t expect to see much of Jon on that series or Kate’s new show Twist of Kate, which is shooting and due out on TLC later this year.

With no chance at a reality gig and no real world job in site, Jon has a $22,000-a-month child support bill to handle. According to TMZ, he’s recently resorted to playing celebrity bartender — but that was a fundraising event for charity, not for his bank account.

Meanwhile, amid all the bustle, press and Dancing with the Stars promotion, Kate’s third book I Just Want You to Know: Letters to My Kids on Love, Faith, and Family still isn’t getting half the response her first two books had. On stands since the April 13 release, it’s just barely passed the 10,000 mark. Ouch!

That may not bode well for her two new shows. Then again, junk food reality TV is harder to resist and easier to digest than something one has to actually (gulp) read.

Visit Reality TV Magazine for all your reality TV news!