In Letters to Juliet Amanda Seyfried portrays Sophie, an American tourist who is moved by a letter found at Juliet’s balcony in Verona, Italy. The correspondence is from a woman who found love at first sight and then ran away from it in fear. 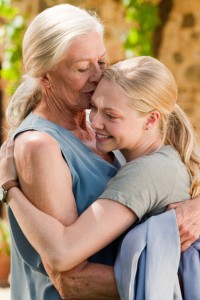 Seyfried finds the woman, played by Vanessa Redgrave, and is determined to help her find her lost love after 50 years. The lost love in question is portrayed by Franco Nero, Redgrave’s real life husband.

In a case of art imitating life, as it so often does, Redgrave and Nero first met — you guessed it — in Italy, 50 years ago. The two were together, then broke up, only to find each other again and begin a life-long love affair that has lasted decades.

In our SheKnows Entertainment featurette from the film, Redgrave and Nero, along with Seyfried, speak to the magic that is their real-life romance and how it greatly influenced the filming of Letters to Juliet.

Letters to Juliet arrives in theaters May 14 and is the latest from the huge star-in-the-making Seyfried. After her turn in the Nicholas Sparks page-to-screen Dear John and her unforgettable performance opposite Meryl Streep in Mamma Mia, it is clear Seyfried is on her way to being Hollywood’s next go-to star in the Sandra Bullock-Julia Roberts vein.

What is so special about this incredibly grounded star — we’ve spoken to her a few times now — is how pure she is in her absolute delight with the love story of Vanessa Redgrave and Franco Nero. It is clear their love influenced the set and brought an aura of reality to the fictional story of two people finding love after decades.

Don’t miss our interview with Seyfried premiering May 14!

Seyfried’s character is far from alone. Over the course of the film, Sophie has her own romance with Redgrave’s character’s son.

Letters to Juliet also showcases an Italian tradition that has only grown with time. The leaving of letters to Juliet under her Verona balcony is a rite of passage for romantics young and old who visit the city. The fact that a film was born around the centuries-old practice is a match made in romantic movie heaven. Filming where Romeo first met Juliet also added a layer of resonance to the entire film, along with the two lovebirds that have been enjoying wedded bliss for decades!

Read on for more Amanda Seyfried