Robin Hood hits theaters May 14 and although SheKnows has seen the film, we can’t share our reaction until tomorrow. But, until then, we have the final trailer for the Russell Crowe and Ridley Scott film.

Robin Hood is Crowe and Scott’s latest collaboration after their efforts on the Oscar-winning Gladiator, A Good Year and Body of Lies. 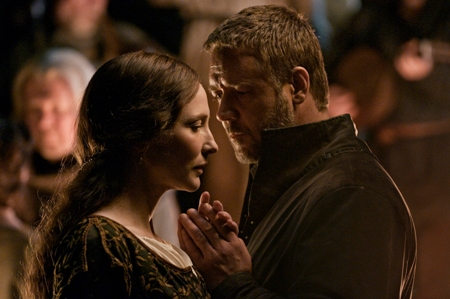 What we can tell you about Robin Hood is that at its heart, the film is an origins story in the fine history of movie franchise beginnings. The legend of Robin Hood is well known. What isn’t is how the son of a stone mason grew up to become a historical icon.

Robin Hood also stars Cate Blanchett as Maid Marian, whose character is far from the lady in waiting previous Hood incarnations have produced. Blanchett’s character wields a sword, shoots an arrow with the best of them and is frankly, not someone you would want to tangle with or upset!

As Scott’s Robin Hood begins, Robin is in France on his way back from fighting the crusades for King Richard the Lionheart. Robin is known as Robin Longstride and his devotion to his King is limited. He makes clear, after they return to England, that he is striking out on his own.

Fate has other plans.

England is in turmoil. The country is broke from Richard’s crusades and in order to fill the country’s coffers, stiff taxes are imposed by force on the entire land. Soon, a rebellion is brewing and at the center of the entire potential civil war is Crowe’s Robin. 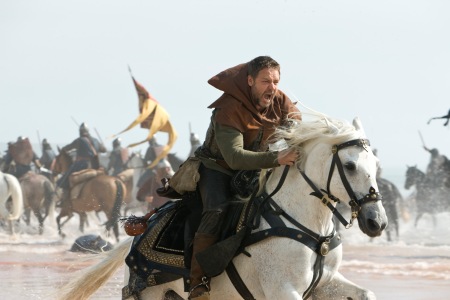 As Robin Hood fans are keenly aware, he is an expert archer whose focus was on self preservation. But, when King Richard dies in battle in France, Robin takes it upon himself to fulfill a dying man’s wish. Thus begins his journey from crusader to hero for the common man.

Robin Hood could be the franchise Crowe has been waiting for his entire career. One thought that Master and Commander with its series of wildly popular books would serve as that, but we are still waiting for a second voyage of that franchise that will probably never arrive.

As Robin Hood is clearly an origins story, if it is a success, look for Crowe, Blanchett and Scott to combine forces again and head back into the forest.

Stay with SheKnows as our Robin Hood review premieres May 13!

Read on for more Russell Crowe