Miley Cyrus doing a lap dance to a much older man? Are we surprised? No, given Cyrus’ recent video release for Can’t Be Tamed and its overtly sexual nature. Plus, toss in a bunch of too-sexy-for-a-teen antics in recent years and we have to say: Did you expect anything else? 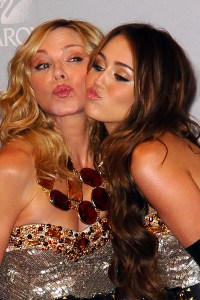 No one should be shocked that the singer is pulling a Britney Spears-type Disney darling-to-sexpot move for her career.

Yet, news arising May 12 of a leaked video showing Cyrus giving a 44-year-old film producer a lap dance is producing shock and awe across the entertainment universe.

The fact that the film producer in question is gay does not deflect the issue at hand.

Watching the video, it is somewhat frightening to see the then 16-year-old girl grinding her behind into the pelvic area of a 44-year-old man. The man in question is Adam Shankman, producer, director and So You Think You Can Dance judge. All who know him say he is as harmless as a turtle.

Yet someone might have wanted to tell him that with or without a camera filming him and Cyrus grinding, the action was simply wrong.

That brings us to the point of Cyrus and her slow but steady announcement to the world that she is no longer a child and should not be considered as such. Cyrus caused waves with her bare-back Vanity Fair cover some years ago. Cyrus immediately distanced herself from the Annie Leibovitz shoot, making the celebrity photographer seem more perverted and less artistic.

Then, there were the “hacked” cell phone pics of her that leaked on the internet that painted the picture of a girl finding her way to womanhood.

Also, who could forget Cyrus’ announcement that she had put a stripper pole in her house and showed the world how good she got at pole dancing in front of millions of children at the Teen Choice awards in 2009?

So, whatever the reaction to this latest Cyrus pronouncement of womanhood, not one soul should be stirred.

Cyrus has been making that announcement with a bullhorn for years now.