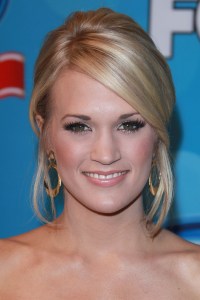 Swift has taken home the big award two years in a row and she’s in the running again with You Belong With Me, but the competition is tough.

Swift and Underwood are also set to battle it out against Reba McEntire’s Consider Me Gone and Lambert’s White Liar for Female Video of the Year.

Aldean’s The Truth is also up for Male Video of the Year. He’s nominated along with Toby Keith’s American Ride, Billy Currington’s People Are Crazy, Tim McGraw’s Southern Voice and Urban’s ‘Til Summer Comes Around.

Lady Antebellum also landed in the Group Video of the Year category with Need You Now. They’re up against Rascal Flatts’ Here Comes Goodbye, Gloriana’s How Far Do You Wanna Go? and Zac Brown Band’s Toes.

Underwood and Lady Antebellum are both nominated for CMT Performance of the Year, along with McEntire, Tim McGraw and Brad Paisley.

The Battle for Best Video

Now that the nominees for Best Video are narrowed down to ten, fans still have a bit of work to do.
The second round of voting starts now and ends June 8, so head over to CMT.com to cast your vote!

Based on these votes, a list of finalists will be announced at the beginning of the 2010 CMT Music Awards. Then, fans can cast their votes via text message throughout the live telecast, with the winner determined by which video receives the most votes.

The main event will air live on Wednesday, June 9 at 8 pm from Nashville’s Bridgestone Arena. Kid Rock is signed on to host and Keith, Lady Antebellum, Lambert, Underwood and Urban are scheduled to perform.

“All I can promise is I will be awesome,” Rock previewed.

Read on for more country music

7 mins ago
by Louisa Ballhaus