Breaking Dawn will be broken into two films, Summit Entertainment has announced of its Twilight Saga franchise.

Scribe Stephenie Meyer has agreed to see her final Twilight book split in two and with sizable raises offered for Breaking Dawn Part II, Kristen Stewart, Robert Pattinson and Taylor Lautner had no trouble signing on the dotted line. Peter Facinelli (Carlisle) and Billy Burke (Charlie) also found their new deals amenable. There’s a new director on board for both films, and he’s an Academy Award winner! 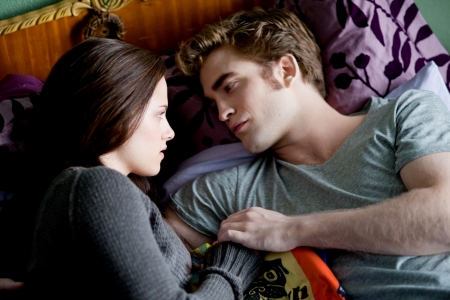 Oscar-winner Bill Condon is another player who’s on board for a double-feature finale. The writer-director, known for such films as Gods and Monsters, Chicago, Kinsey and Dreamgirls, has signed on to direct both Breaking Dawn films.

“I’m stoked to be getting underway on the adventure of making Breaking Dawn,” Condon posted on The Twilight Saga Facebook page. “As you’ve probably heard, I’ve been given a very warm welcome by Stephenie and Team Summit — who are super-focused, as you know, on getting these movies right…

“I’m a huge admirer of the already-iconic Kristen, Robert, and Taylor, and wanted to be the one to work with them as they face the challenges of bringing your beloved characters to the end of their journeys. Really, what could be more fun than that?”

With all those hefty raises in mind, Condon is working with Summit to keep the budget in check, which may mean moving the production to Louisiana.

The next Twilight installment, Eclipse, is due out on June 30. Breaking Dawn is set to hit theaters in November 2011, with the final chapter expected in summer 2012.