Avril Lavigne and Brody Jenner have answered the “are they dating” question courtesy of Twitter! 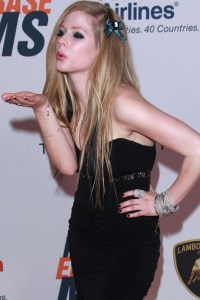 Remember the Magic 8 Ball? Not long ago, there was no better way to find answers than by peering into the blue dye of that black vortex and waiting for the words, “It is certain,” or “Better not tell you now,” or “My sources say no.”

But if you need the answer to a burning question today, look no further than a bubbly baby blue sky and a little birdie. That’s right, kids, Twitter knows all. It’s no big surprise, then, that speculation about whether the least punk rock of any self-proclaimed punk rocker, Avril Lavigne, and The Hills local Himbo, Brody Jenner have been dating, was ended via Tweet.

In fact, Lavigne and Jenner have been very publicly twittering each other like crazy (it’s totally replaced Poking on Facebook).

It started when Lavigne wrote, “I love you eyelashes.” To which Brody responded, “Kisses.” And then Lavigne tweeted in response, “Kisses back.”

If we may indulge in a little arm chair psychology, does anyone else find it interesting that she wrote, “I love you,” and he wrote, “Kisses?” That’s such a burn. He didn’t even go Ghost and toss out, “Ditto,” he just diverted entirely. Some might say that doesn’t bode too well for the Sk8er Girl. As the 8-Ball might say, “Outlook not so good.”

Still, the Tweets were the hard evidence (pun intended) everyone was hunting for after the couple went to Las Vegas and reportedly got matching tattoos, first lightning bolts and then, according to OK! magazine, the F-word. They have been seen frequenting Voyeur nightclub in West Hollywood and spent Friday night at the Race to Erase MS event at the Hyatt Regency Century Plaza in LA.

The 25-year-old singer performed a five-song set while Jenner got down like Penny Lane on the sidelines. They also shared a table (and some gross PDA) with family, including Jenner’s mom, Linda Thompson, who Lavigne greeted with a long hug.

Lavigne filed for divorce from her ex-husband, Sum 41 frontman Deryck Whibley, in October 2009 and hasn’t had any major romance since. Brody, whose dating exploits have been well documented on The Hills, has previously dated Kristin Cavallari, Nicole Richie (which he admitted he only did for publicity), Lauren Conrad and Playmate of the Year, Jayde Nicole.

It can’t be denied, Jenner is a beautiful man and, yes, those eyelashes are delightful, but homeboy gets around. In fact, according to one of his male co-stars, we’ve been told he’s got the gift that keeps on giving. Ahhh, young love in Hollywood.

Read on for more Avril Lavigne

The Hills Brody Jenner and Avril Lavigne dating?
Avril Lavigne’s Alice in Wonderland music video
Celebrity names like Avril Lavigne, how do you pronounce that?