Famed jazz singer and actress Lena Horne died of unreleased causes in New York. She was 92. 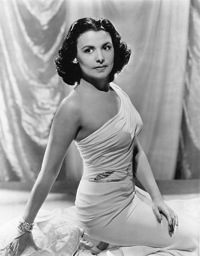 Horne led the way for African American performers in the 1940s as one of the first to sing with a major white band and the first to play the Copacabana.

As a contract player with MGM, she was among only a handful of black performers signed to a major Hollywood studio.

Horne was ambivalent about her crossover status. “I was unique in that I was the kind of black that white people could accept,” she once said. “I was their daydream. I had the worst kind of acceptance because it was never for how great I was or what I contributed. It was because of the way I looked.”

“I don’t have to be an imitation of a white woman that Hollywood sort of hoped I’d become,” Horne once said. “I’m me, and I’m like nobody else.”

Horne’s musical hits include such classics as Stormy Weather, The Lady Is a Tramp, Bewitched, Bothered and Bewildered and Just One of Those Things.

The singer-actress took a stand for civil rights in the industry when, despite her success, she and others of color — including audiences — were kept out of choice venues.

“I was always battling the system to be with my people. Finally, I wouldn’t work for places that kept us out. It was a damn fight everywhere I was, every place I worked, in New York, in Hollywood, all over the world,” she said in the book I Dream a World: Portraits of Black Women Who Changed America by Brian Lanker.

Horne began her career as a chorus girl at the iconic Cotton Club and became a nightclub performer before moving to Hollywood, a gig she picked back up after being blacklisted during McCarthyism.

Horne collected numerous awards throughout her career, including (but not limited to) four Grammys, two Tonys, an NAACP Image Award, a Kennedy Center honor and a star on the Hollywood Walk of Fame.

She married Louis Jordan Jones in 1937, with whom she had two children, Gail and Edwin. The couple divorced in 1944. Horne married for the second time in 1947 to white musical conductor Lennie Hayton. This pair separated in the 60s but never divorced, and Horne later admitted that she had married Hayton to advance her career and cross color lines.

Her son died in 1970 and Jones in 1971. Horne is survived by daughter Gail Lumet Buckley, a best-selling author, and granddaughter Jenny Lumet, a screenwriter who penned Rachel Getting Married.