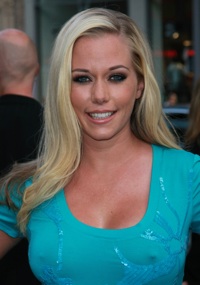 The former Girl Next Door is trying to block the sale of a sex tape she made with an ex-boyfriend when she was 18 years old, and claims to be distraught over the release of the intimate recordings.

That emotion would be much more believable if she hadn’t tried to sell the tapes herself in 2008.

In documents obtained by RadarOnline.com, Wilkinson spelled out an agreement between herself and her team for shopping the tapes (yes, there is more than one) under the company heading Home Run Productions LLC.

Kendra’s intent was to acquire and license video rights to the material, featuring the Playboy model in sexual scenarios that would make Paris Hilton blush.

The plan was allegedly scrapped when Kendra became engaged to hubby Hank Baskett.

Despite the lawsuit, Vivid Entertainment isn’t backing down. They plan to release the tape by the end of the month. “We believe this could be our all time best selling celebrity tape,” said the company founder.

read on for more kendra wilkinson