Thanks to the massive Facebook fan group, Betty White will take the Saturday Night Live stage for the first time ever this weekend. Former cast members Tina Fey, Amy Poehler, Molly Shannon, Maya Rudolph, Ana Gasteyer and Rachel Dratch return for the Mother’s Day episode and musical guest Jay-Z, an icon of another generation, will get in some laughs, too.

“There are a lot of sketches coming up,” White previewed of this weekend’s show. “It seems like about 350. I’m sure it’s not that many but it feels like it. And I will be doing a couple of sketches with Jay-Z, so that should be fun.” 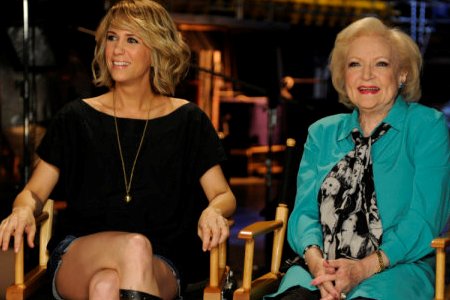 In the promos, the 88-year-old funny-woman flashes gang signs and pumps the air like a pro, proving she’s ready to do anything for laughs. Well, almost anything.

Fans hadn’t seen much of White for a spell, but after she landed on Boston Legal five years ago, she went on to make a serious comeback.

Last year, she nabbed the SAG Life Achievement Award and appeared in The Proposal, alongside Oscar winner Sandra Bullock. In addition to a slew of cameos and sitcom appearances, she’s also gone serious for stints on the daytime soap The Bold and the Beautiful.

Many fans associate White with her ditzy, naive Golden Girls image and of late, she’s had fun slapping that sweetheart image in the face by playing sassy and doing diva-licious cameos on shows like Ugly Betty.

Then, of course, there was that now infamous Snickers Super Bowl commercial, which led to the Facebook group “Betty White to host SNL (please?)!”

White has spent seven decades getting laughs, however. She’s had a groundbreaking career, as a player both in front of and behind the camera, and those who watched TV before the ’80s recognize her seemingly “new” energy from her devious character Sue Ann Nivens on The Carol Burnett Show and other gigs.

“I’ve always had a bawdy sense of humor,” White said. “My father was a traveling salesman and he would bring jokes home. He’d tell them and they’d never explain them to me. My mom and dad had a wonderful sense of humor. We would even get through some of the grim times by at least keeping a little sense of humor. It sure beats the alternative.”

The veteran of comedy is looking forward to hosting the special Mother’s Day episode and working with SNL‘s returning ladies, not to mention Jay-Z, who she called “the hottest thing since sliced bread.”

Read on for more Betty White