Hollywood’s latest additions to the Baby Brigade mean this Mother’s Day will be extra special for this year’s new mothers including some Angels, a few of Seattle Grace’s finest and a Girl Next Door. 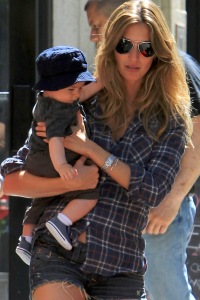 Look at what happened when he got her alone. R&B crooner Robin Thicke and his wife, actress Paula Patton, welcomed son Julian Fuego on April 6, 2010. With any luck, he’ll grow up to be just as fuego as his dad.

After years of battling endometriosis, Top Chef host, cookbook author and jewelry designer Padma Lakshmi gave birth to daughter Krishna Thea on February 20, 2010. Though she’s yet to reveal the identity of her baby daddy, he’s rumored to be her former fling Adam Dell, the brother of Dell Computers founder Michael Dell, who she reportedly wants nothing to do with.

Fame seeker Kourtney Kardashian and her super douche on-again, off-again boyfriend Scott Disick welcomed son Mason Dash Disick on December 14, 2009. What better way to celebrate the birth than by exploiting your child with a “very special episode” of Keeping Up with the Kardashians?

Read on for more celebrity babies