The new film Babies follows the first year of four new arrivals from the four very different worlds of the United States, Japan, Namibia, and Mongolia. In addition to promising adorable coos, giggles and wiggles, the visually dazzling documentary offers a fascinating perspective on the first year of life. 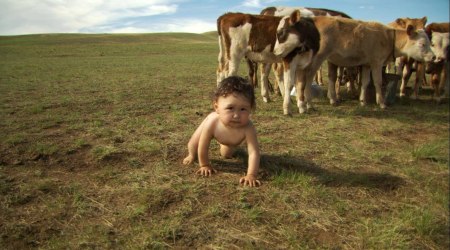 The stars of Babies include little Ponijao, who was born into the traditional Himba culture in Opuwo, Namibia; Bayarjargal, from a nomadic family near Bayanchandmani, Mongolia; Tokyo city girl Mari and San Fran native Hattie.

“My work has always been very broad and I look and try to understand how other cultures are living,” Balmes told Reuters.

Most of us in the United States will have no trouble seeing ourselves or our friends in Hattie’s world, but the differences and similarities seen in Japan, Namibia, and Mongolia, may shift your perspective on just what counts in raising and sheltering your little ones.

At the same time, the film breaks ground by letting us see the world through the wide eyes of a newborn. While many of us would agree there’s nothing more adorable than that first smile or gurgling coo — or even that first good tumble! — it’s also fascinating to stop and consider what catches the eye of our favorite entertainers.

The film has no dialogue and the families chosen were picked for their happy, positive vibes. The result is a joyful romp, rife with giggles and laughs.

“I think this comedy aspect allows the film to be enjoyed by a wide group of people,” Balmes said. “And if (an audience member) doesn’t speak a word of English, this will be the perfect movie.”

As would only happen in America, there’s been a mild controversy over baby Hattie. California law outlines strict requirements about filming babies, but producer Amandine Billot maintains Hattie was never an employee, nor a worker of any kind, so the laws don’t apply here.

“Just as filmmakers who produce nature films seek to blend in with their environment, we set out to create a wildlife film of human babies by being as unobtrusive as possible,” he said. “In short, we quietly observed and recorded the babies’ activities.”

The film is in theaters now and producers hope the universal appeal of the subject matter and the Mother’s Day crowd will keep Babies in the box office game, in spite of the competition from Iron Man 2.

Read on for more Babies