Football great Lawrence Taylor has been arrested on charges of statutory rape and patronizing a prostitute. 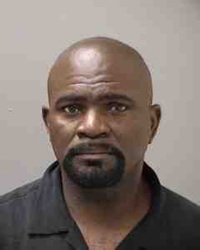 Taylor was nabbed by cops at a Holiday Inn guest room in Suffern, New York, after receiving a call from a relative of the 16-year-old girl in question. The girl herself had a big ol’ shiner, but LT says he had nothing to do with it and thought the girl was nineteen. Turns out the girl was under the control of a pimp.

Here’s how cops and feds are saying it went down (so to speak):

The girl’s alleged pimp, Rasheed Davis, sent her text messages instructing her to get it on with Taylor, tell him she was 19 years old and charge him $300. The girl, who ran away from home earlier this year, refused. According to FBI agents, who are now investigating Davis on suspicion of human trafficking, Davis physically assaulted the girl “in an effort to coerce [the victim] into participating in a commercial sex act.”

At that point, the girl complied and met Taylor in his room for sex. She told cops that she assured Taylor she was 19 but that he did pay for sex.

LT’s blindly trusting third wife doesn’t believe a word of it. Lynette Taylor told The Insider, “I don’t believe it. This is not my husband’s character. I’ve spoken to him several times. He is distraught because he didn’t do anything wrong. I believe and he believes that he was set up.”

“First, he is not one of those people who would invite a person back to his room. He has been in situations before where he has been robbed and by different women, so that’s not something that he does. Second thing is, I know my husband’s taste. He has a certain type of woman that he likes and from what I’m learning of this, this person had nothing to offer him, so I don’t know why he would go to such extremes for someone that’s not even his thing. I’m sure there’s no shortage of women.”

Lynette’s fantasyland is due to be shattered today when she learns her darling husband admitted to sleeping with the girl after cops found a used condom in the hotel room. Taylor will be charged with a felony count of third degree rape (meaning a person over 21 has sex with a person younger than 17) and patronizing a prostitute.

The former football giant was most recently seen competing on Dancing with the Stars and was immediately dropped as a spokesperson for Nutrisystem after his most recent arrest. No stranger to a jail cell, Taylor has been arrested twice for trying to buy cocaine from undercover cops and again in 2009 for leaving the scene of an accident.